U.S.S. Somers: The Little Brig that Started it All

For nearly seven decades since the founding of the republic, naval and political leaders such as John Paul Jones, Alexander Hamilton, and Matthew C. Perry had advocated for a formal institution for the education and training of US Navy officers. While the US Military Academy at West Point had been training officers for the Army since 1802, forty years later, there was still no equivalent for the Navy. Instead, prospective Navy officers received a baptism by fire on an active-duty vessel on the high seas, or in one case, aboard the brainchild of Matthew C. Perry himself: a specially designated training vessel known as the brig Somers. 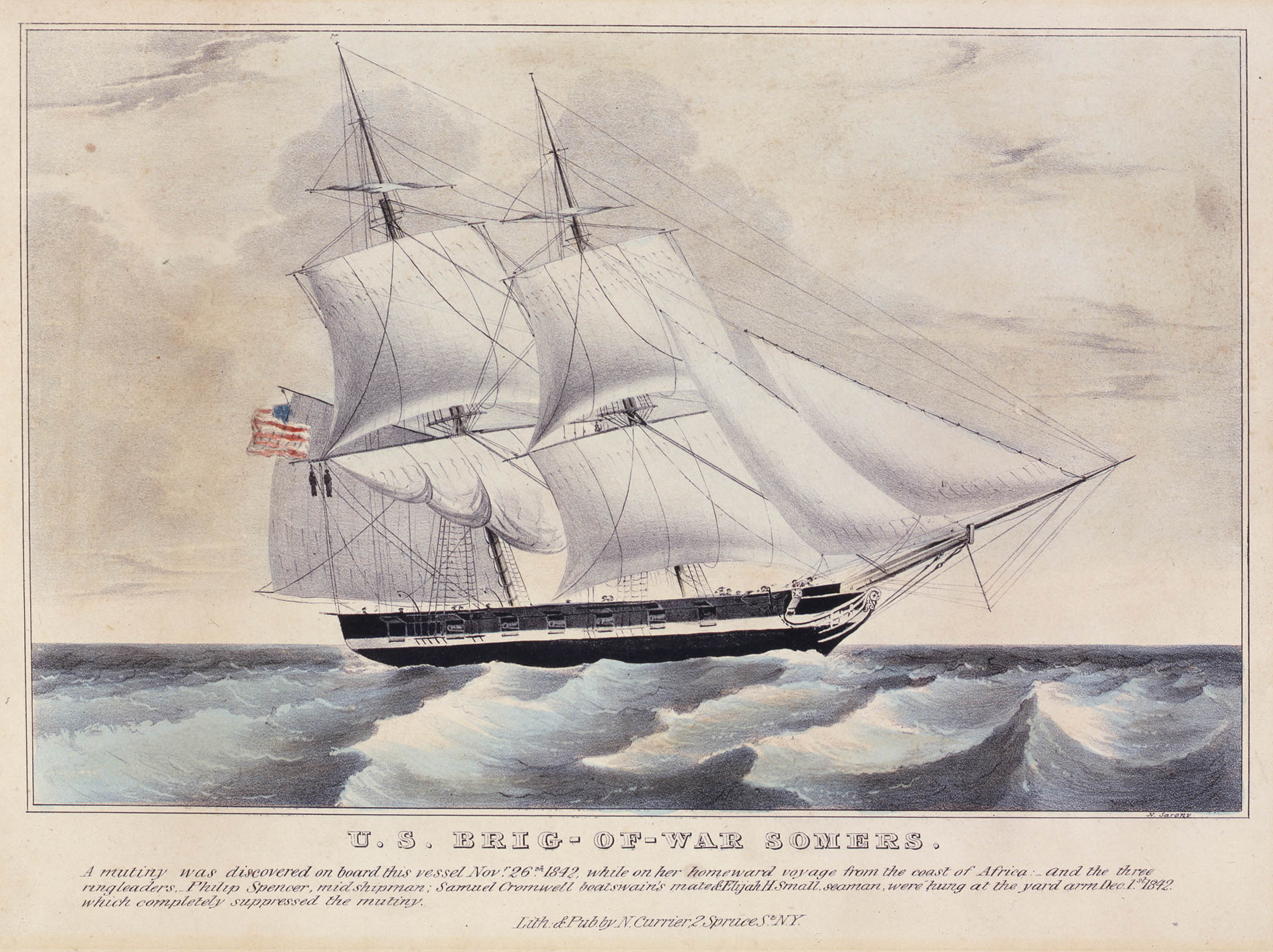 Above: Currier & Ives print of the US Brig-of-War Somers, courtesy of the Naval Academy Museum's Beverley R. Robinson Collection

Originally commissioned on May 12, 1842, the Somers sailed out of New York Harbor on September 13, 1842, with Commander Alexander Slidell Mackenzie in command. The vessel's course took it first to the west coast of Africa and from there to the West Indies on orders to deliver dispatches to U.S.S. Vandalia. On November 26, while near St. Thomas, Lieutenant Guert Gansevoort informed Mackenzie of a plot, led by Acting Midshipman Philip Spencer, the son of the Secretary of War, to murder the officers and most of the crew of the Somers. Spencer and his alleged co-conspirators were promptly arrested. Days later, on December 1, Spencer, Boatswain's Mate Samuel Cromwell, and Seaman Elijah Small were found guilty by the officers of the Somers and hanged from the ship's yardarms. 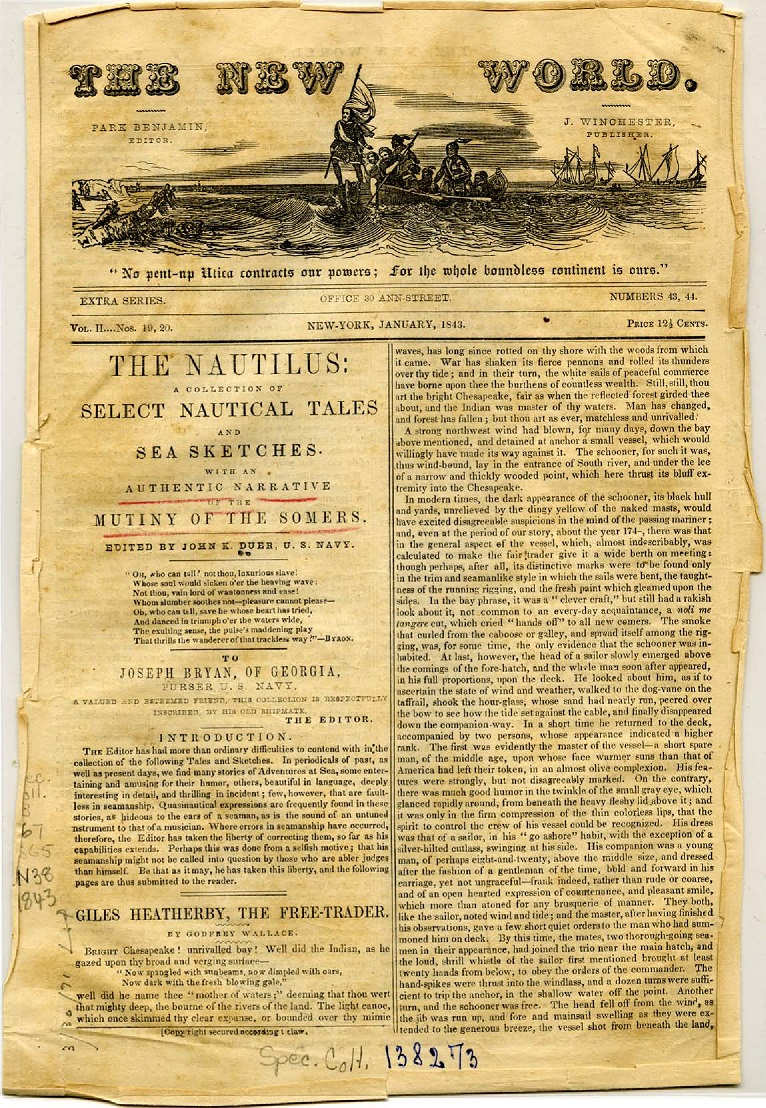 Above: "The Nautilus: A Collection of Select Nautical Tales and Sea Sketches. With an Authentic Narrative of the Mutiny of the Somers."

Following the Somers' return to New York on December 14, a naval court of inquiry was convened which, on January 19, 1843, found in favor of Mackenzie's exoneration. Unsatisfied with the outcome, Secretary of War John C. Spencer lobbied for Mackenzie to be tried in civil court. Instead, beginning on February 1, Mackenzie faced a court martial at the insistence of Secretary of the Navy Abel Upshur. Two months later, on April 1, Mackenzie was acquitted yet again. At the time, the proceedings and the verdicts were controversial, with opinions expressed both in support and damnation of Mackenzie. 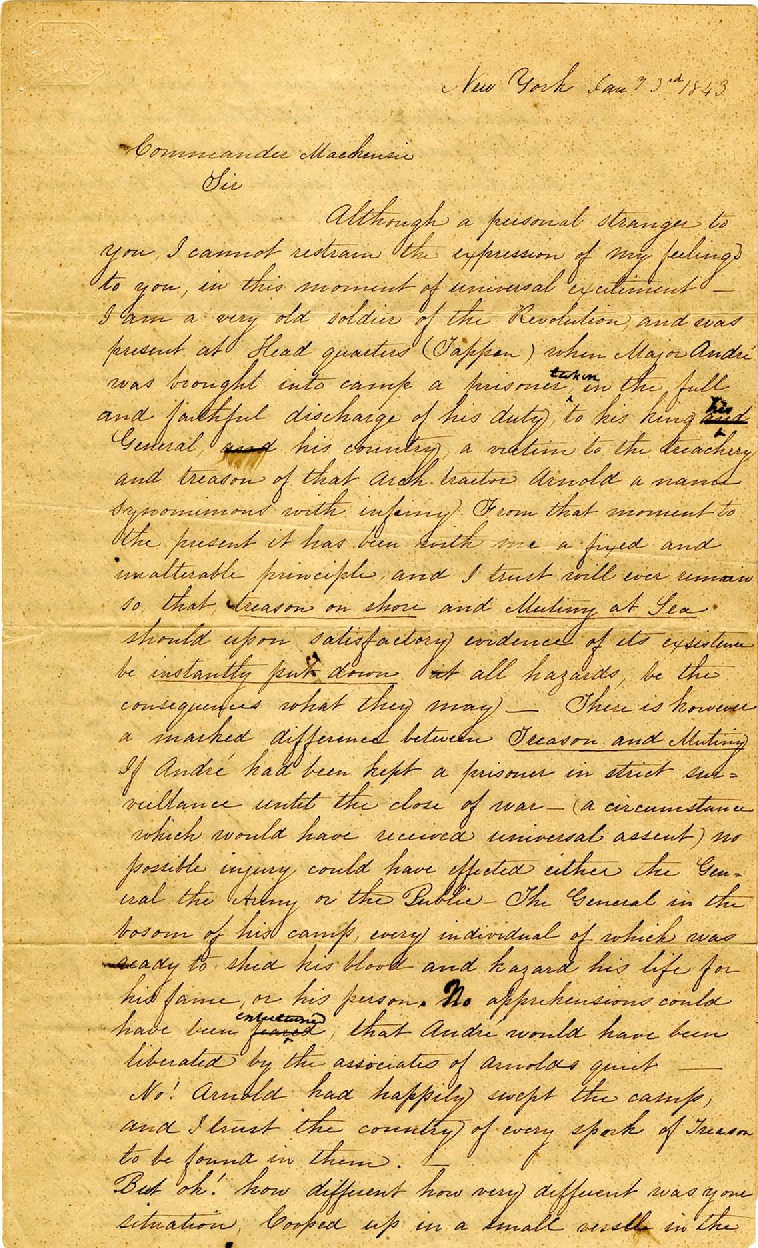 Above: On one side of the debate, Revolutionary War veteran William Popham writes to Commander Mackenzie in his defense, noting "Mutiny at Sea should upon satisfactory evidence of its existence be instantly put down at all hazards, be the consequences what they may." 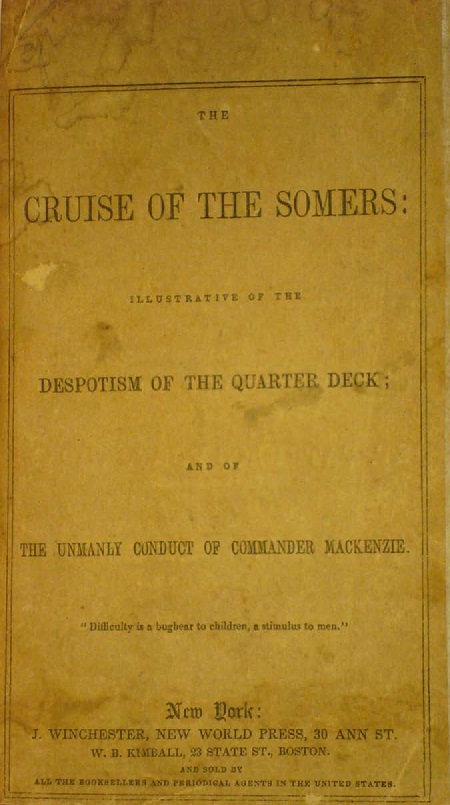 Above: On the other side of the debate, an author purported to be James Fenimore Cooper offers an indictment of Mackenzie's actions in The Cruise of the Somers: Illustrative of the Despotism of the Quarter Deck: and of the Unmanly Conduct of Commander Mackenzie.

Whether or not Spencer was actually plotting a mutiny aboard the Somers, and whether or not Mackenzie acted properly in response are still matters of debate to this day. What is certain is that the death of the son of a cabinet secretary at the hands of a navy commander provided James K. Polk's new Secretary of the Navy George Bancroft with the one thing none of predecessors had benefited from: the political will necessary to establish a formal Naval Academy.

All images, with exception of the print of U.S.S. Somers, are available in the USNA Digital Collections: The Somers Affair. Print of USS Somers courtesy of the Naval Academy Museum's Beverley R. Robinson Collection.