Tiberius Gracchus, Tribune of the Plebs

Plebe Summer will soon be upon us at the U.S. Naval Academy.  Plebes, derived from the Latin plebs, is the traditional name given to the incoming students through their first year at the school.  The designation seems to date from the 1850s, when the Naval School became the Naval Academy and a four-year academic course was introduced.  It is quite likely that some of those early students would have dipped into Adam Ferguson’s History of Rome or Plutarch’s Lives, books available to them in the Naval Academy library, and have read about Tiberius Gracchus (c. 163-133 BC), a famous tribune of the plebs from the late Roman Republic. 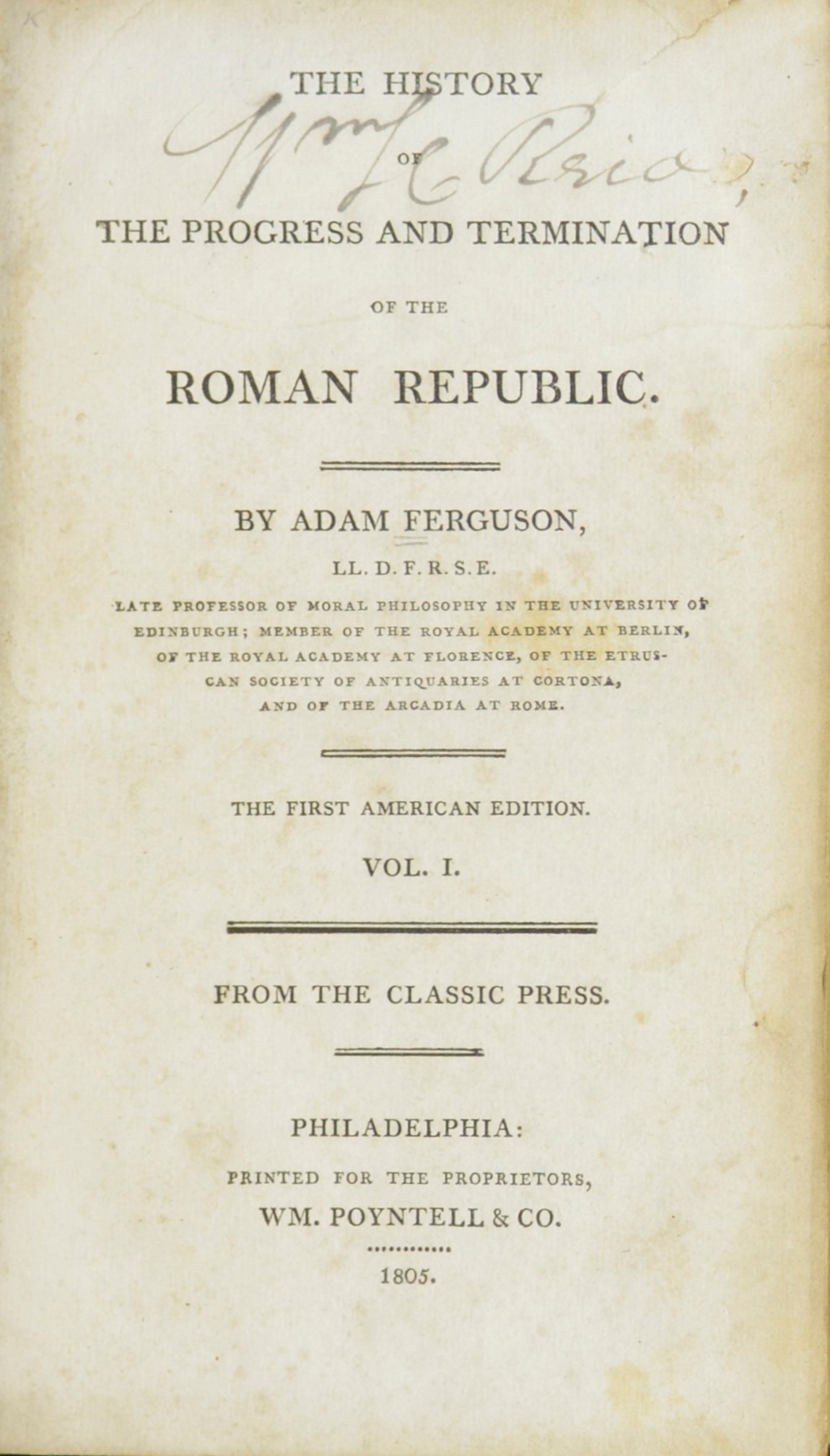 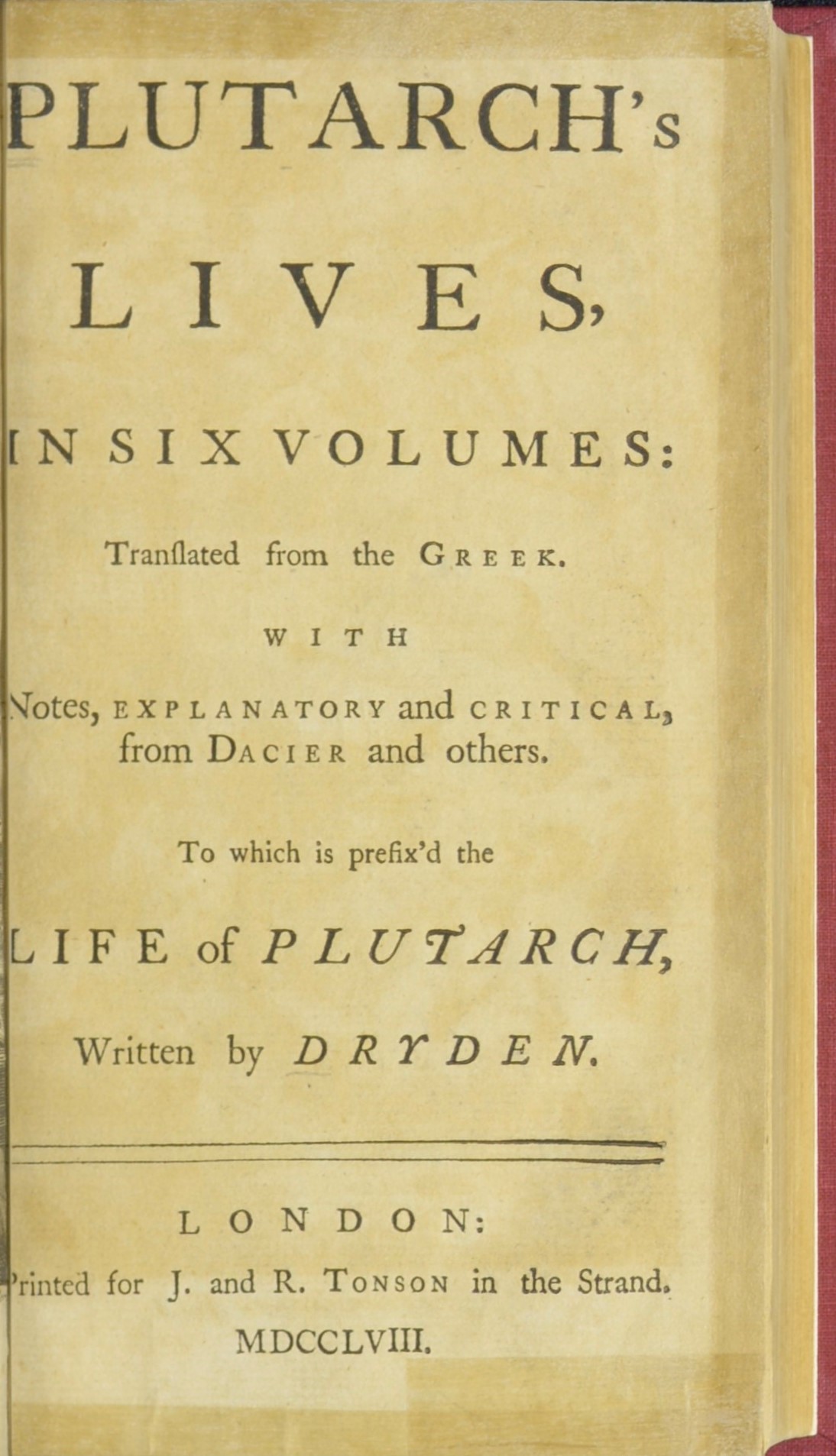 The grandson of Scipio Africanus (236-185 BC), victor over Hannibal at the Battle of Zama in 202 BC that ended the Second Punic War, Tiberius himself served with distinction under the command of his brother-in-law Scipio Aemilianus (c.184-129 BC) in the Third Punic War against Carthage.  Tiberius won a mural crown (a Roman military honor) for being among the first to scale the doomed city’s walls.  In 133 BC, Tiberius stood for election as a tribune of the plebs.  The ten tribunes of the plebs were charged with the defense of the persons and property of the plebs or plebeians.  In ancient Rome, society was divided into patricians and plebeians.  The patricians were an aristocracy of birth whose origins remain murky.  Everyone else, regardless of wealth, were plebeians.  Elected by the plebeian assembly and exercising their power within the precincts of Rome, the tribunes could summon the plebs to assembly and elicit resolutions (plebiscita).  They possessed a right of veto against an act performed by a magistrate (or by another tribune), against election laws, and against senate resolutions. 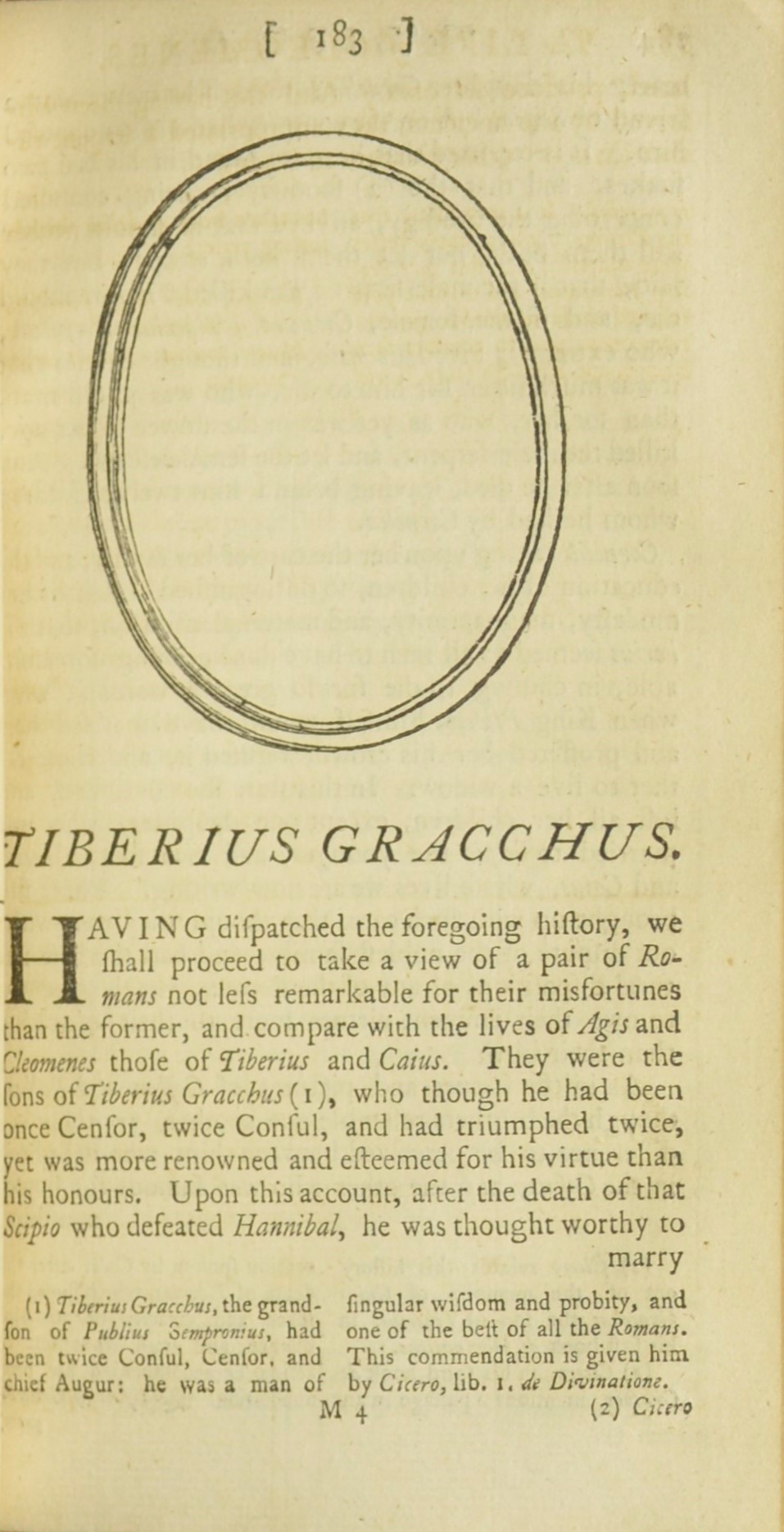 Tiberius introduced a bill that would restrict ownership of public land (territory that Rome had gained in the conquest of Italy) to 500 acres and would give dispossessed Romans 30 acres per family.  This land reform measure, in making the 30 acres inalienable, was meant to correct the abuses of wealthy aristocrats engrossing large tracts of public land at the expense of small farmers, the backbone of the Roman constitution.  According to Plutarch, Tiberius said “the savage beasts in Italy have their particular dens, they have their places of repose and refuge; but the men who have borne arms, and exposed their lives for the safety of their country, enjoy in the meantime nothing more in it but the fresh air and sunshine….they fight and die only to maintain the luxury and wealth of other men; and while they are styled the sovereigns of the world, they have not one foot of ground which they can call their own.”

The owners of large landholdings were opposed to Tiberius’s measure, which would redistribute property they already held, and they pressured the tribune Marcus Octavius to veto it in the plebeian assembly.  While a tribune could veto another tribune, it was uncustomary to negate bills in the people’s interest.  To force Octavius to rescind his veto, Tiberius blocked all other public business.  Octavius remained firm, however, so Tiberius called another assembly to remove his fellow tribune from office.  This was an unprecedented and possibly illegal act.  With Octavius no longer able to obstruct the land legislation, it passed without opposition.  Tiberius’s opponents began to talk of prosecuting him when his one-year term was over.

Tiberius’s supporters included Appius Claudius Pulcher, princeps senatus (senior senator) and augur, and the consul (chief magistrate) for 133 BC Publius Mucius Scaevola, but much of his backing evaporated when in a move against all tradition he stood for re-election to avoid prosecution on leaving office.  The election was stalled over a procedural debate, but Tiberius had clearly lost the support of the other tribunes.  There were also rumors that Tiberius wanted to become King of Rome.  In the senate, the ex-consul of 138 BC Scipio Nasica, who held a large amount of public land and wanted to retain it, urged that Tiberius be stopped.  Mucius Scaevola argued that the senate, a deliberative body, could not interfere in the business of the plebs.  Upon this pronouncement, Scipio responded, “Since the consul regards not the safety of the commonwealth, let everyone who will defend the laws, follow me,” pulling his toga over his head in the manner of a priest going to sacrifice.  In so doing, he was explicitly condoning violence.

Tiberius was holding an assembly on the Capitoline outside the Temple of Jupiter when Scipio Nasica and a crowd of senators and their attendants arrived.  In the violent riot that ensued, many of Tiberius’ followers were clubbed to death and thrown down the precipice of the hill.  Tiberius himself was struck down by two men, one of whom was a fellow tribune.  His body was thrown into the Tiber like that of a common criminal’s.  After hundreds of years of settling internal disputes through negotiation and debate, the Romans had resorted to settling this dispute with blood.  Tiberius Gracchus’ tribunate marks the beginning of the “Roman Revolution:”  the breakdown of concordia (the tradition of avoiding pushing legal powers to extremes) and the introduction of murder into politics.

Matyszak, Philip.  Chronicle of the Roman Republic: The Rulers of Ancient Rome from Romulus to Augustus.  New York: Thames and Hudson, 2003  DG231.M39 2003