Ask your average passerby to name a Civil War battle or theater, and you are likely to get a response like Gettysburg, Antietam, or Fort Sumter. Restrict that same passerby to naming a naval battle or theater, and the response might be the Monitor and the Merrimack. Far less likely of a response would be the South Atlantic Blockade or any of the operations along the Mississippi River. Infinitesimal are the odds that someone mentions an encounter in the territorial waters of another nation. But while the Civil War was, of course, a domestic affair, the presence of the combatant navies on the high seas made it a global conflict that occasionally involved other nations. The Battle of Shimonoseki Straits, fought 157 years ago today, was a notable Civil War-era action for the US Navy in that it occurred in the Far East and didn't involve the Confederacy.

To help counter the industrial and trade advantages inherent in the North, the Confederacy commissioned a series of commerce raiders to harass and nullify Union merchant vessels on the high seas. Confederate ships with names like Alabama, Shenandoah, Florida, and Sumter, built mostly in England, operated against Union shipping across the Atlantic, Pacific, and Indian oceans. In response, the Union Navy deployed its own sloops-of-war as counter forces, with the likes of U.S.S. Kearsarge, U.S.S. Wachusett, and U.S.S. Wyoming, dispatched to hunt down the Confederate raiders across the globe. 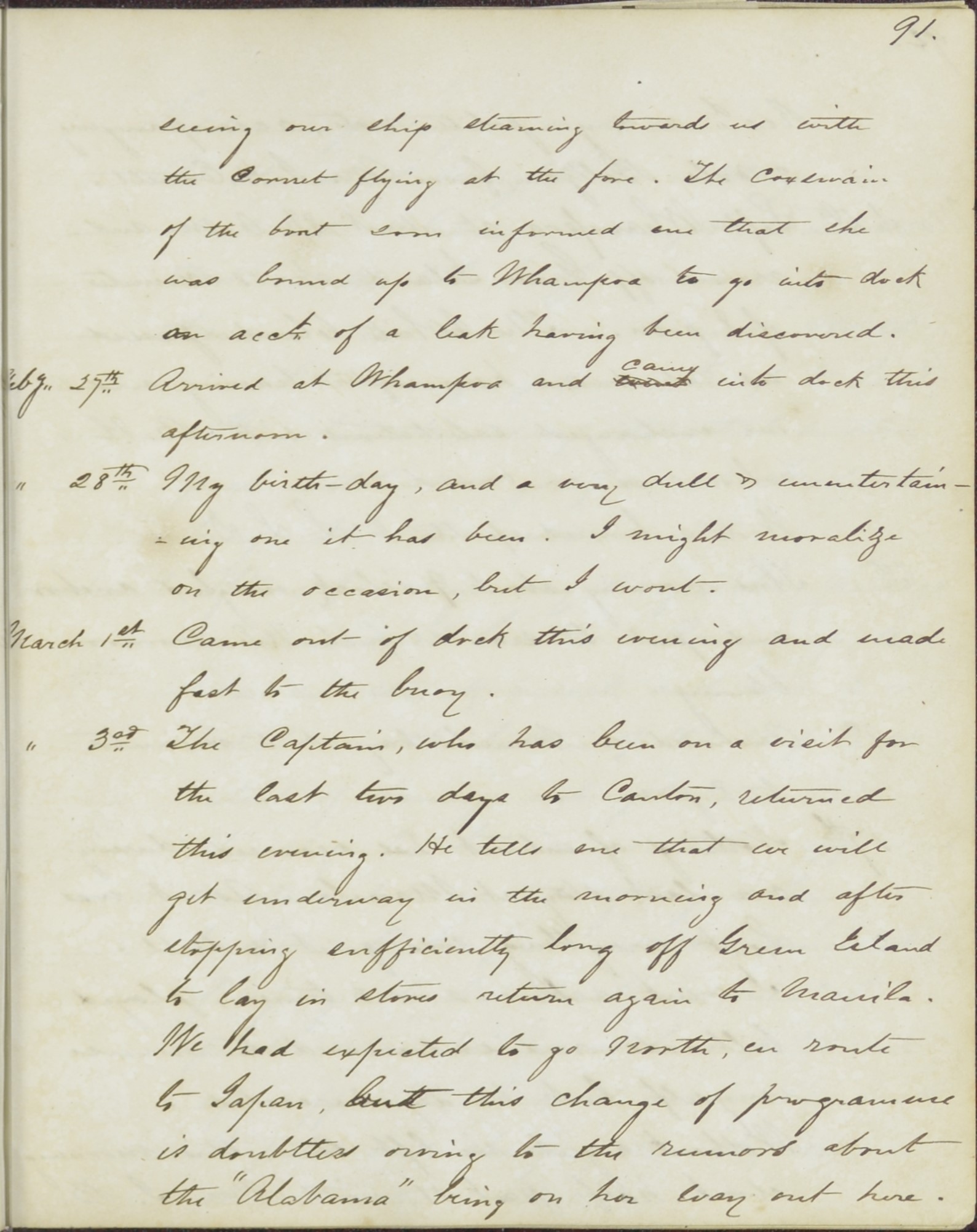 Above: In his diary entry of March 3, 1863, U.S.S. Wyoming surgeon Edwin Denby comments on the rumors of Confederate commerce raider C.S.S. Alabama deploying to the Far East. 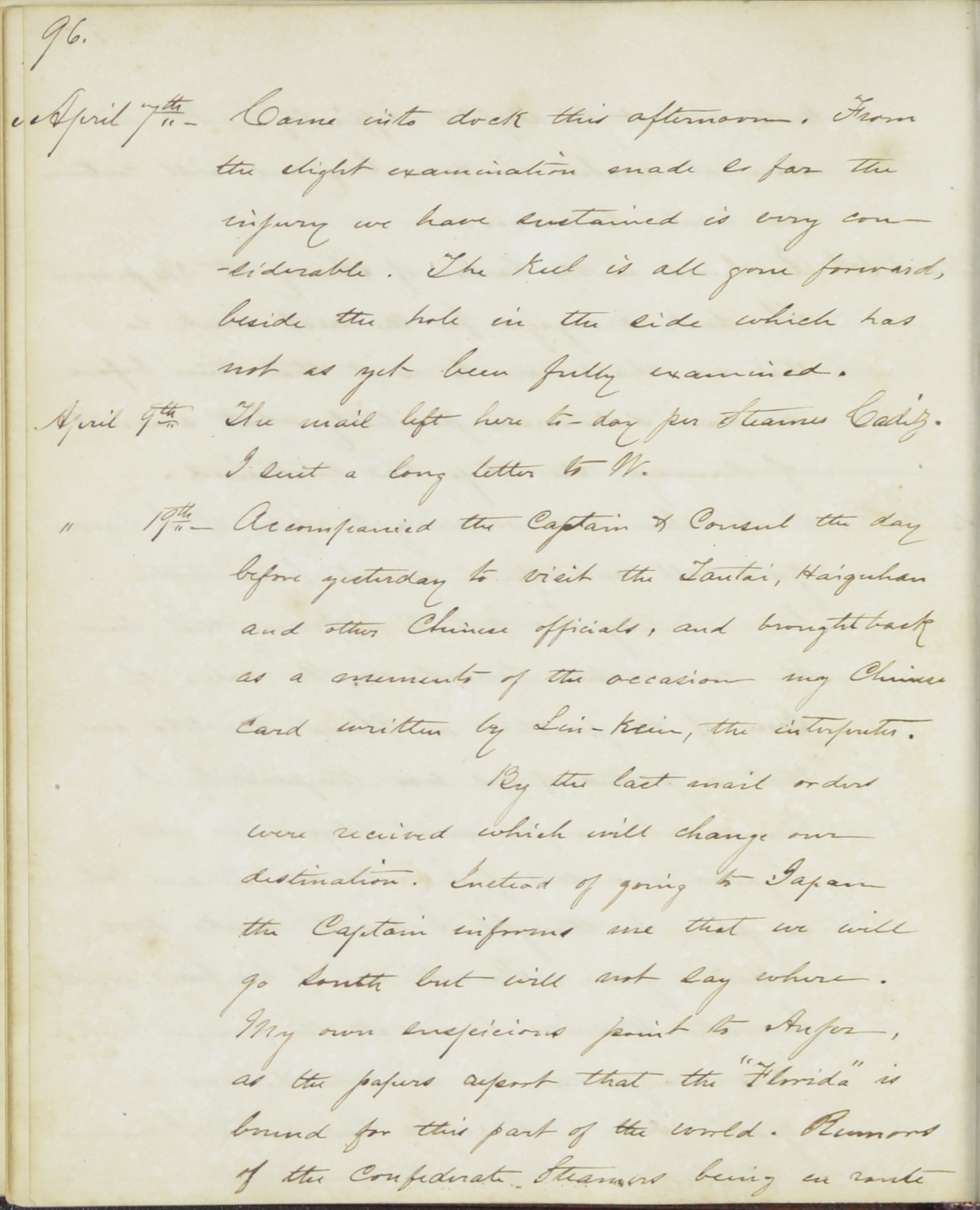 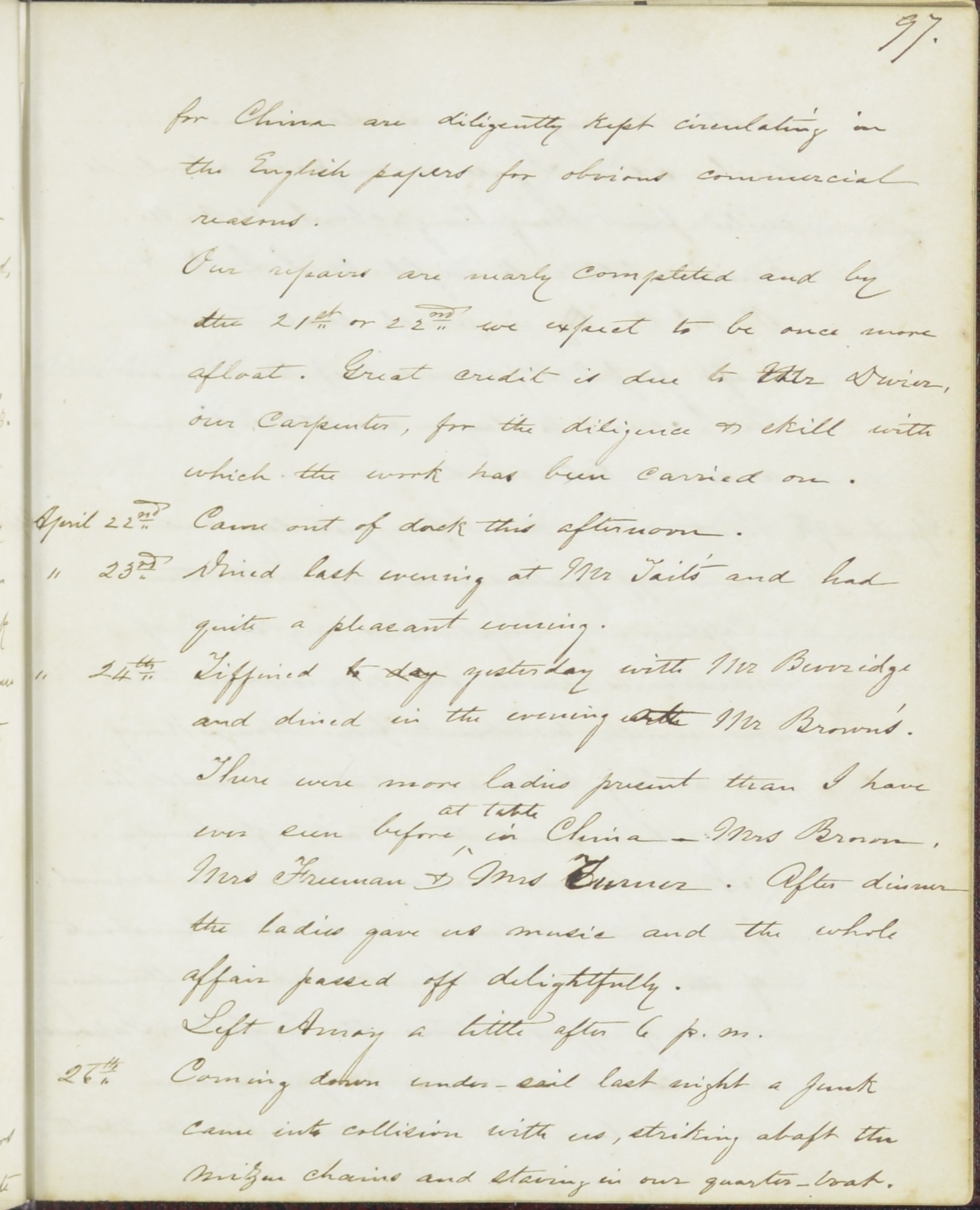 So global was the conflict and the Union's hunt for Confederate commerce raiders, that one of the Union's hunters ultimately found itself involved in the first hostile engagement between U.S. and Japanese forces. After having cruised in Central and South American waters in search of Confederate raiders, U.S.S. Wyoming deployed to the Far East in the summer of 1862 in continuation of that mission. Although her time in the Far East would see her operate in and around Macau, Shantou, and the Dutch East Indies, much of the Wyoming's time would be spent in Japanese waters.

Above: Password used by Wyoming's crew to enter the American Legation in Edo.

While the early months of Wyoming's time in and around Japan proved relatively peaceful, with visits to the American Legation in Edo, tours of local shrines, and meetings with members of the Shogunate, by the spring of the 1863, tensions in Japan were on the rise. The ongoing British response to the September 1862 murder of merchant Charles Richardson was fueling anti-foreign sentiment. In May, the American Legation in Edo burned. By June, the Japanese government was ordering all foreigners to leave the country by the 25th of June. 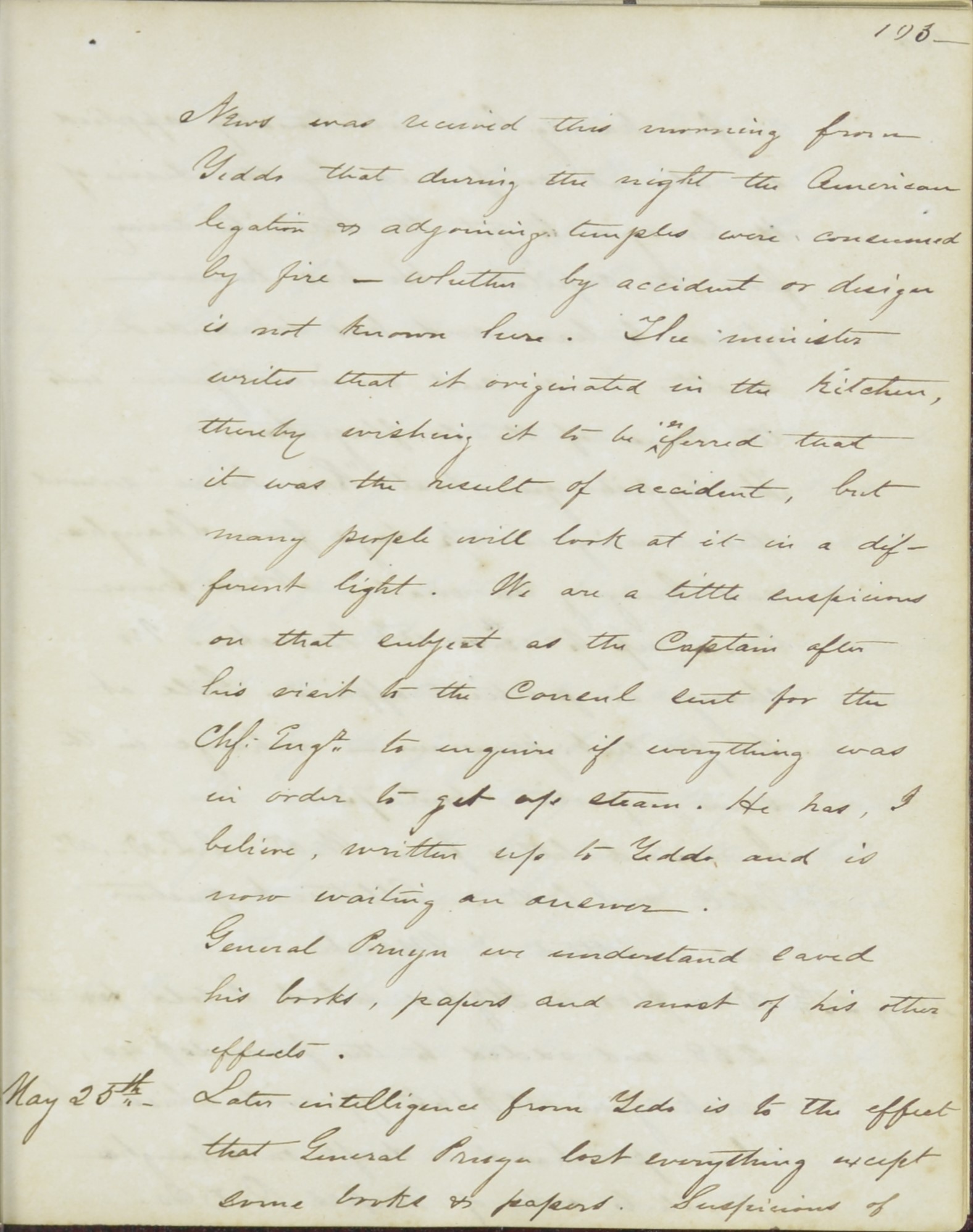 Above: Edwin Denby discusses the burning of the American legation in Edo in his diary entry of May 24, 1863.

The day after the expulsion deadline passed, tensions spilled over into hostilities when two vessels of one of the local Japanese feudal lords or "daimyo" attacked the American merchant vessel Pembroke in the Straits of Shimonoseki. Although Pembroke escaped unscathed, when word of the incident reached captain David McDougal of the Wyoming and U.S. Minister Robert Pruyn in July, it was determined that the Japanese attack could not go unanswered.

On July 13, Wyoming weighed anchor and proceeded to the scene of the incident. Entering the straits on the morning of July 16, 1863, Wyoming engaged the forces of the daimyo, including a steamer, brig, and bark, as well as several shore batteries. In a battle that lasted little more than an hour, Wyoming managed to sink the Japanese steamer and inflict heavy damage on the brig, which was last seen sinking by the stern. In turn, the Wyoming, which had briefly run aground during the action, lost only four men to enemy fire. 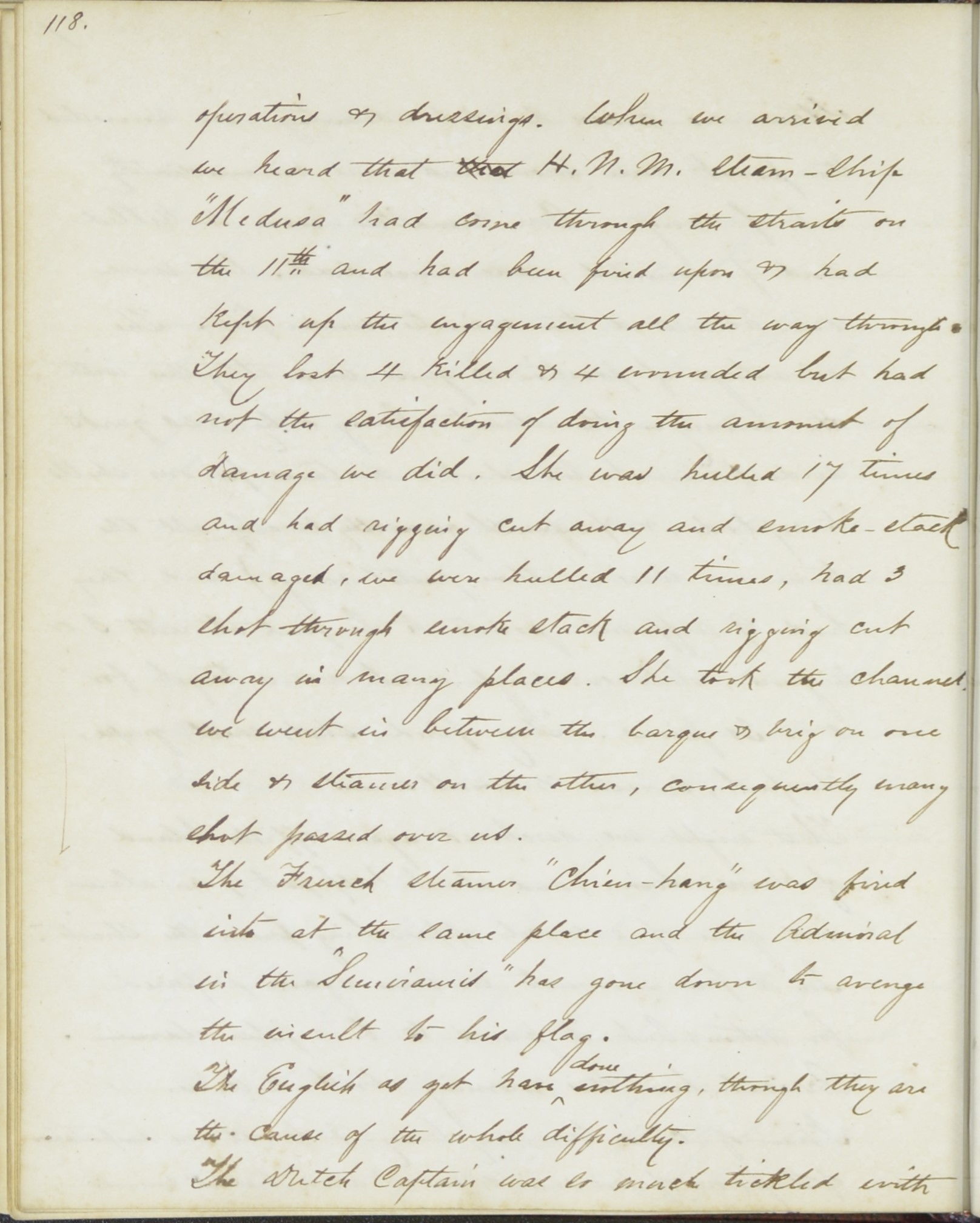 Above: Part of Denby's description of the Battle of Shimonoseki Straits from his diary entry of July 20, 1863. 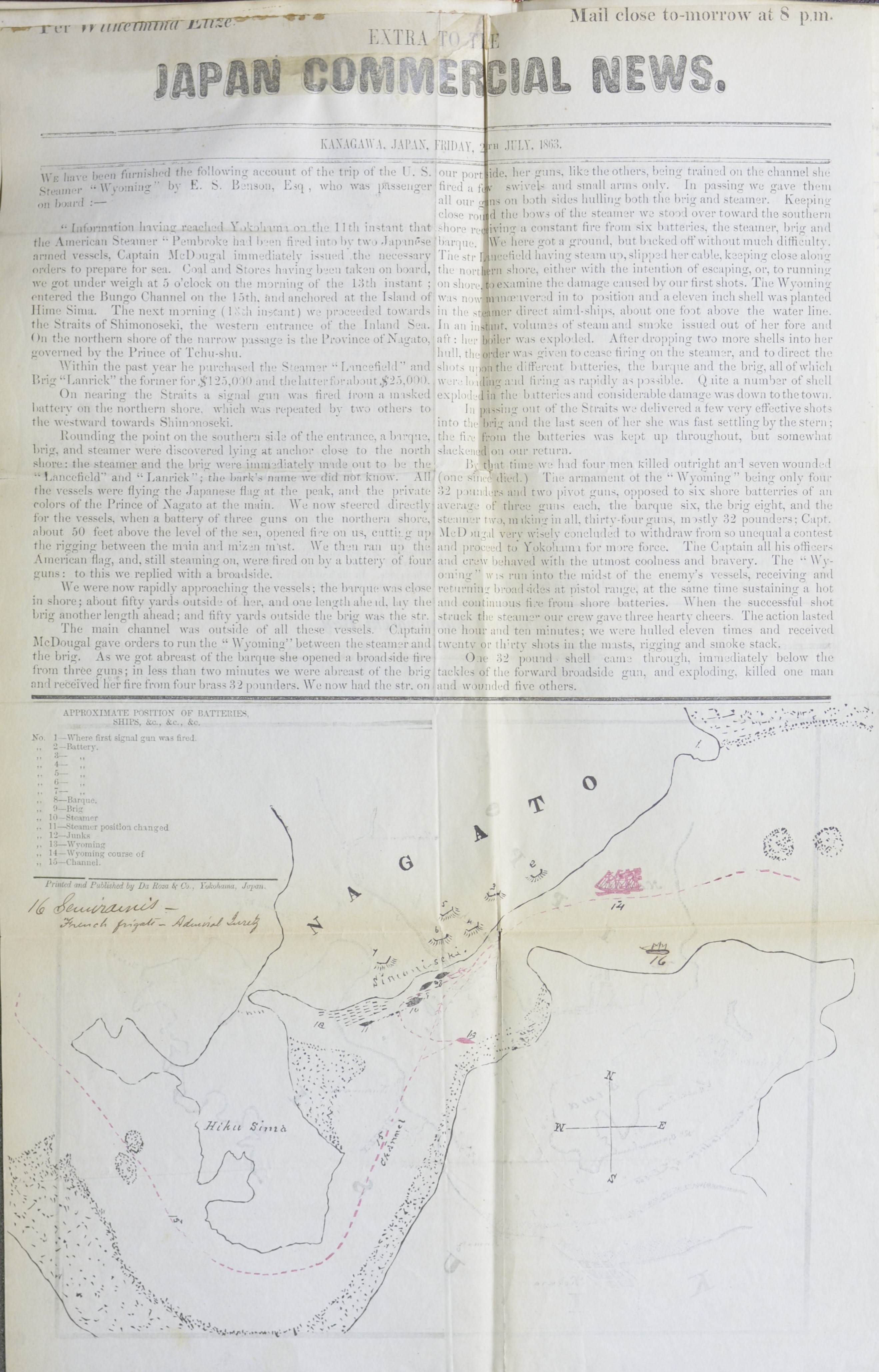 Above: Coverage of the Battle of Shimonoseki Straits in the Japan Commercial News, including a map of the battle.

Having nullified two of the daimyo's vessels, but still under fire from the shore batteries, Wyoming exited the straits and retired to Yokohama. With the Battle of Shimonoseki Straits over, Wyoming's crew affected repairs, and she resumed her hunt for Confederate commerce raiders once more.