Normally, this would be Commissioning Week when a series of yearend festivities culminate in the graduation and commissioning of the Naval Academy's first class midshipmen.  However due to the COVID-19 outbreak, the firsties are receiving their diplomas and commissions in a series of smaller ceremonies with a virtual graduation ceremony on Friday. Other traditional events such as the Herndon Climb, Color Parade, and Blue Angels demonstration will not occur. Although disruptions to graduation and Commissioning Week (formerly June Week) are rare, they have occurred occasionally during the academy's 175-year history.

A shortage of officers in the fleet was the most common cause for disruptions to June Week traditions, but there was one instance of peacetime changes. From 1903-1907, graduations were moved up to January or February so the Navy could have enough officers for the new battleships that would form the Great White Fleet. During the period, festivities were still held surrounding graduation as well as during June Week. The Army and Navy Register of 10 June 1905 provides a description of events on what normally would have been graduation day:

In the morning the last of the practical exhibitions took place, consisting of maneuvers of small boats under steam and oars. Later the brigade of midshipmen was addressed by Congressman William A. Jones, of Virginia, a member of the board [of visitors], and by Governor Warfield, of Maryland, and in the evening the week came to a close with a largely attended and brilliant ball held in the splendid new armory.1

The continuation of June Week traditions was a theme during both world wars despite a switch to a three-year course of study both times. During World War I, this meant the class of 1917 graduated in March, but a June Week still occurred, albeit a few weeks late, when the class of 1918 graduated on 28 June 1917. For World War II, the academy did not wait until war was imminent and began the shift to the three-year curriculum in 1940. This led to a June Week with no graduations in 1941 despite two classes graduating that year: the class of 1941 on 7 February and the class of 1942 on 19 December. During this period more athletic contests had been added to the annual events along with movie screening, both of which could occur any time of year (if one swaps out winter sports such as basketball for spring ones such as baseball). But as this editor laments in the class of 1941's Lucky Bag, not every tradition could move:

Graduation is one of those unexplained phenomena - for three and a half year it remains tucked away safely in the far distant future, and then, without sufficient warning, it jumps suddenly from the calendar, a reality. This behavior was accentuated for the Class of 1941, with graduation taking place on the 7th of February instead of the customary first week of June. Our graduation could not, therefore, be accompanied by such traditions as the First Class Picnic and the buttoning on of Ensign's shoulder marks on white service uniforms. Indeed the sole remaining symbol of our having reached our goal amid the snow flurries of February in a world torn by war was the addition of the gold knot to the handle of our sword - the distinguishing mark of an officer in the United States Navy. 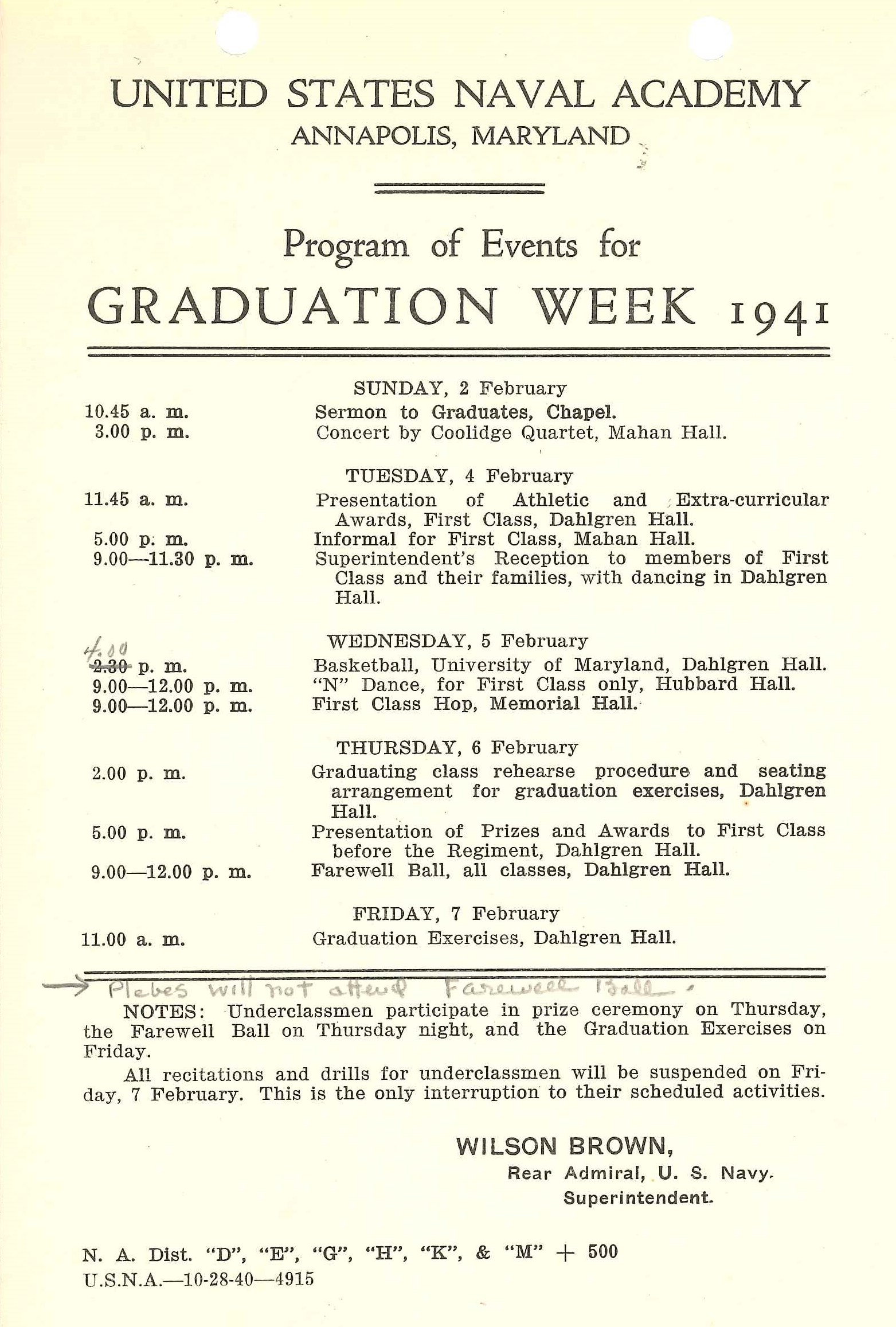 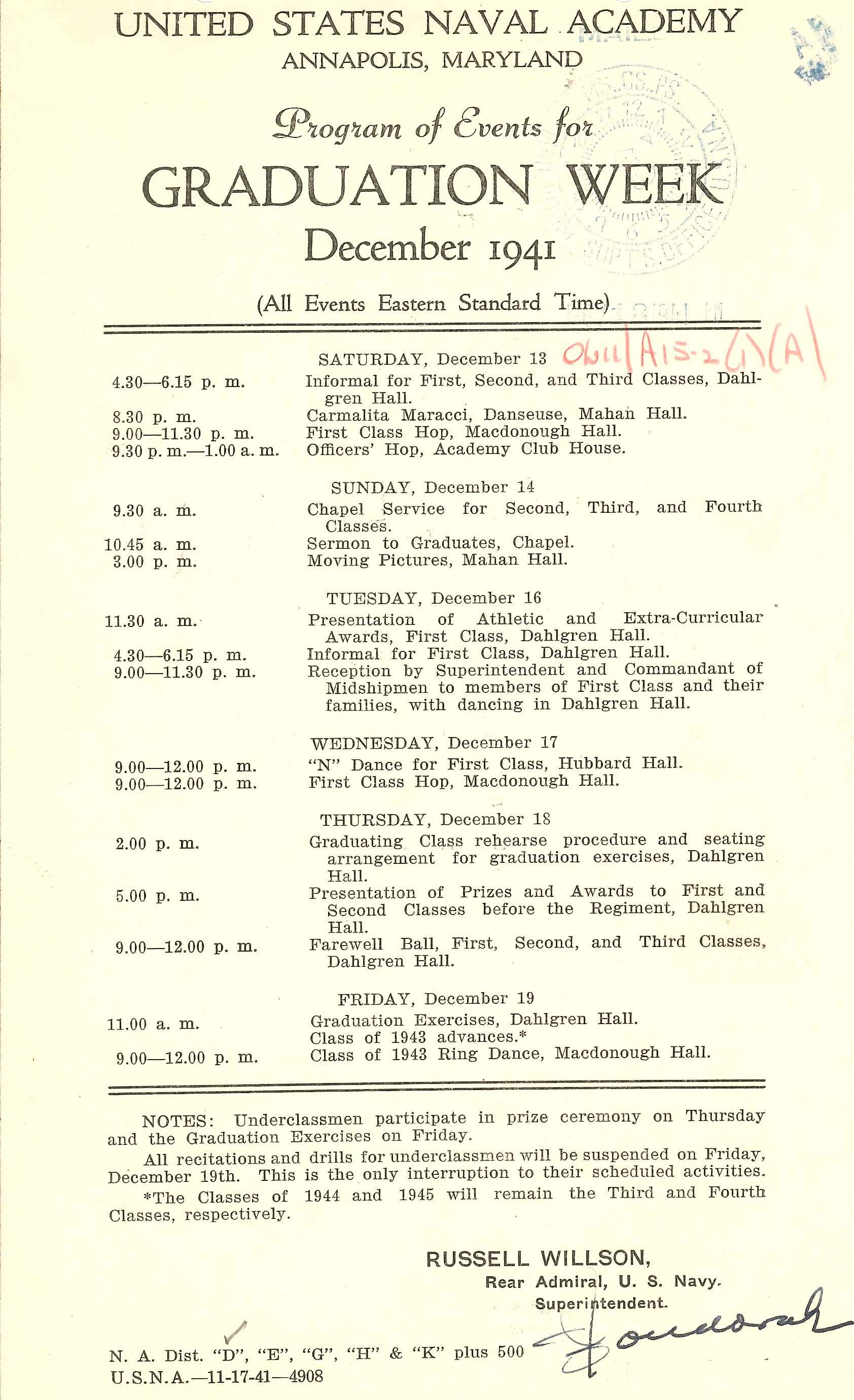 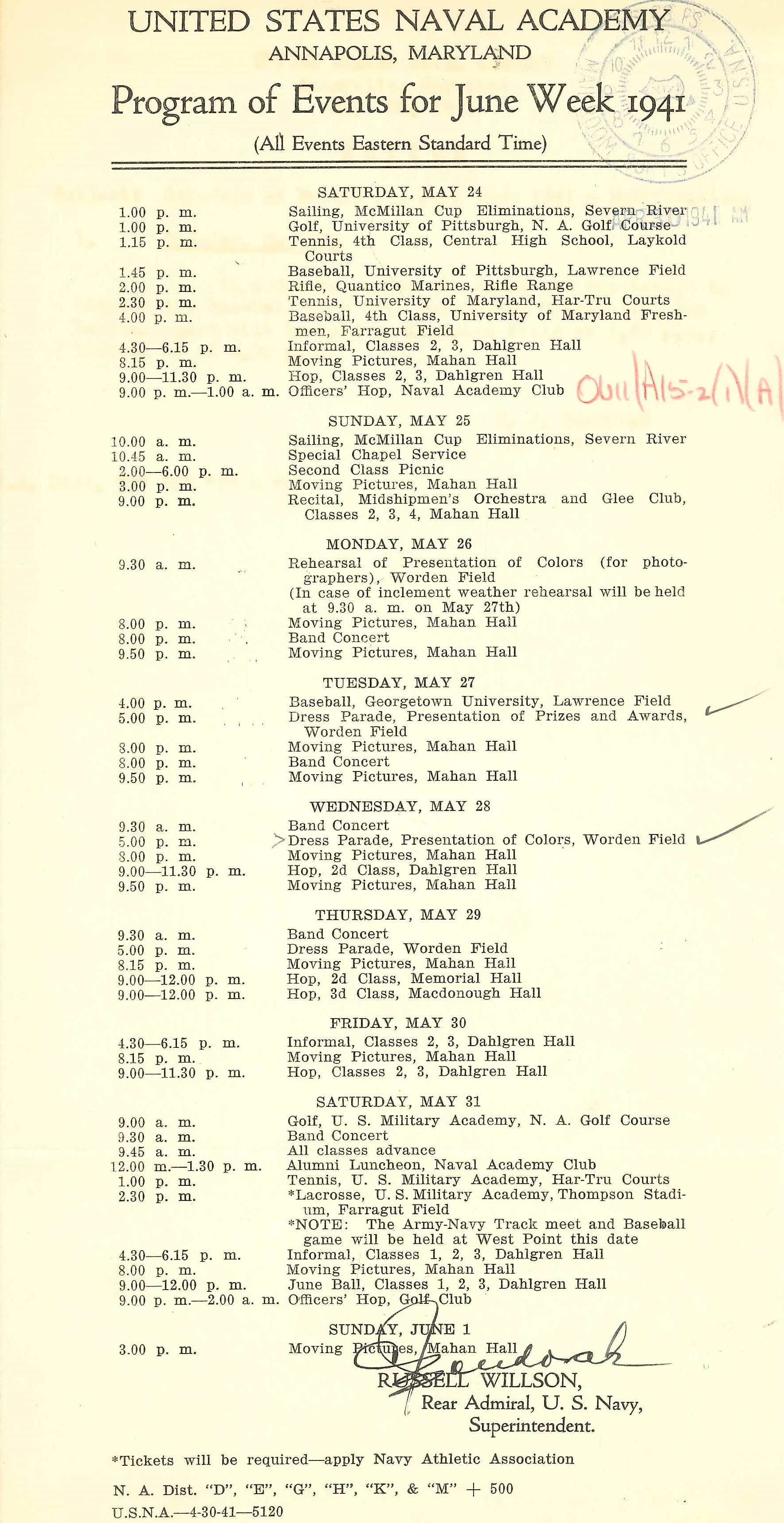 So one needs to go back to the nineteenth century to find an instance of a Naval Academy graduation without a June Week. With war against Spain on the horizon, the class of 1898's graduation was already advanced to 4 April when, on 2 April, according to the Army and Navy Journal, "the programme was changed so suddenly that messengers were hurried to members of the First Class in every direction, bringing them from drills and recreations, to inform them to prepare for graduation." Academy historian Jack Sweetman wrote that "diplomas were passed out at the noon meal," and while graduation was not quite that informal, it did take place during an impromptu midday formation. With "a scarce hundred" in attendance and brief remarks by the Commandant, diplomas were indeed passed out, cheers rendered, and graduates detached from the academy. Two hours later, the practice ship Standish departed Annapolis bound for Norfolk with most of the class aboard. When the original graduation day arrived, the newly commissioned officers were already en route to Cuba. The class of 1899 graduated the following January, but they enjoyed a ceremony in the chapel and other traditions of the time such as being carried on the shoulders of the underclassmen and a ball that evening. Despite the lack of graduates, June Week was still held in 1899 with a crew race against Yale, parades, and another ball. 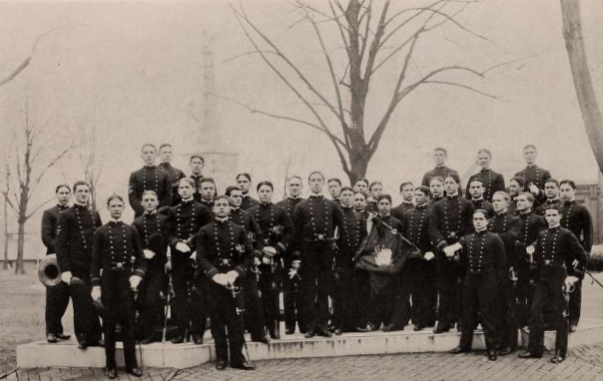 The class of 1898 who graduated earlier than expected and went directly to war. (From the 1898 Lucky Bag)

As a result, the class of 1898's experience is probably the one most resembling that of this year's class with a pared down graduation and no other attendant festivities.2 Then, as now,  the traditions and ceremonies surrounding the graduation and commissioning were not dispensed with lightly, and efforts were made to accommodate as many of them as possible. It was no doubt a source of disappointment for the classes, but also a shared experience that drew them closer in years that followed.

1 "the splendid new armory" refers to Dahlgren Hall where graduation ceremonies were held beginning in 1903.

2 The Civil War years were chaotic with portions of classes or sometimes multiple classes departing for wartime duty throughout the year. However, the establishment of most June Week traditions after the war provides a good enough reason to not delve into the experience of those classes.