The New Naval Academy That Never Was

As the United States Naval Academy moved into the latter half of the twentieth century, it was becoming evident that its physical plant was rapidly becoming inadequate. The academy, as designed by Ernest Flagg at a time when the Regiment of Midshipmen numbered fewer than 500, simply could not support the academic mission of an institution projected to house and educate a brigade of over 4,000 by the 1960s. To address the academy's overcrowding and other physical shortfalls, the Chief of Naval Personnel established the Special Advisory Commission on Future Academic Facilities for the United States Naval Academy on June 10, 1961.

Members of the Special Advisory Commission on Future Academic Facilities for the United States Naval Academy.

Chaired by Admiral Ben Moreell and featuring the architectural talents of noted modernist architect Edward Durell Stone, the commission issued its initial report on November 1, 1961, with a full report and master plan submitted to the Chief of Naval Personnel on January 15, 1962. At the heart of the master plan was the proposed construction of three new buildings: a science building, enlisted barracks, and an auditorium. The designs for all three, in a style reminiscent of many of Stone's other mid-to-late-career projects (notably the campus of SUNY Albany), featured a 360-degree facade of arched glass curtain walls behind a colonnade supporting exaggerated overhangs. 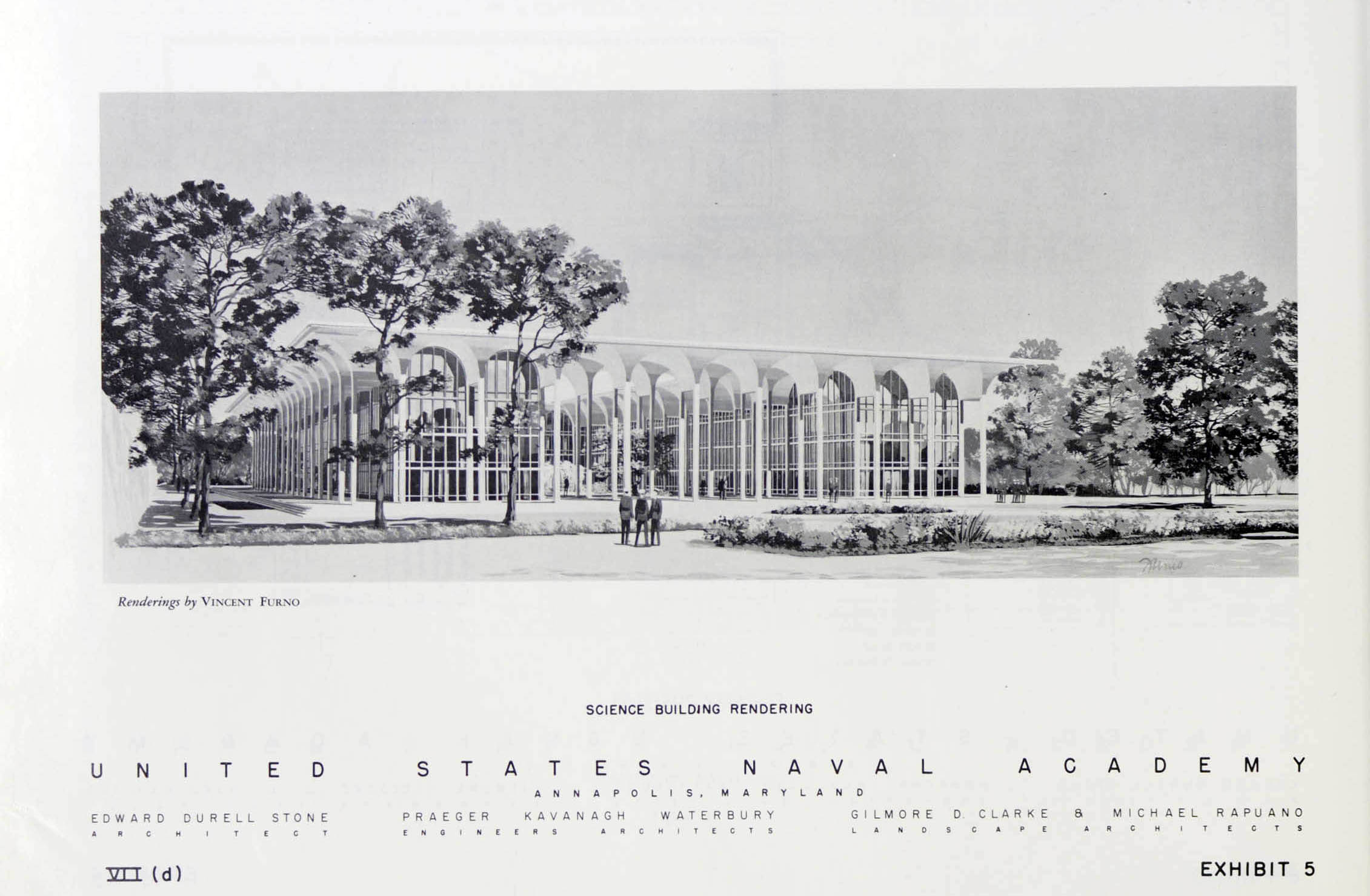 Rendering of the proposed Science Building. 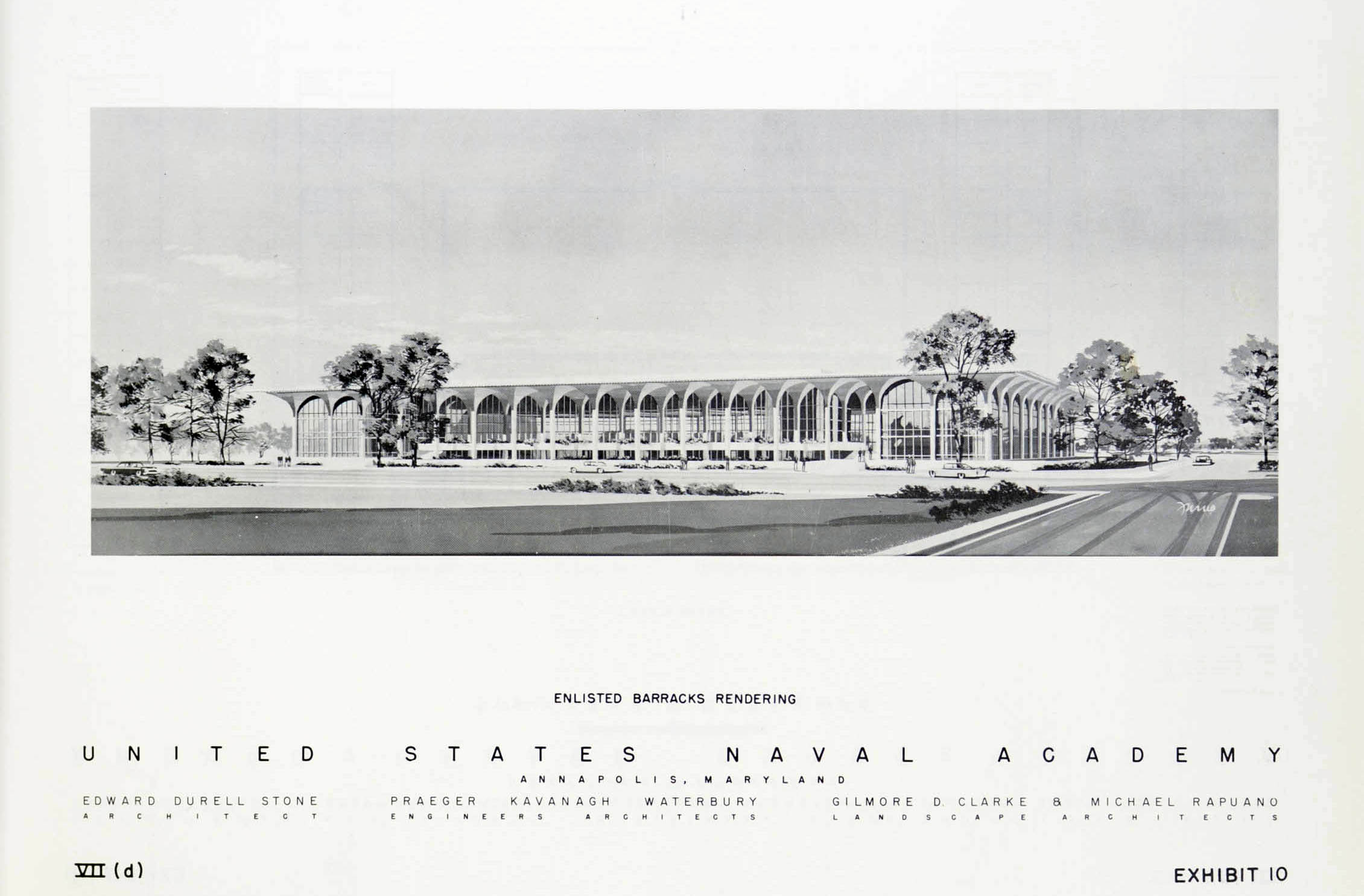 Rendering of the proposed Enlisted Barracks. 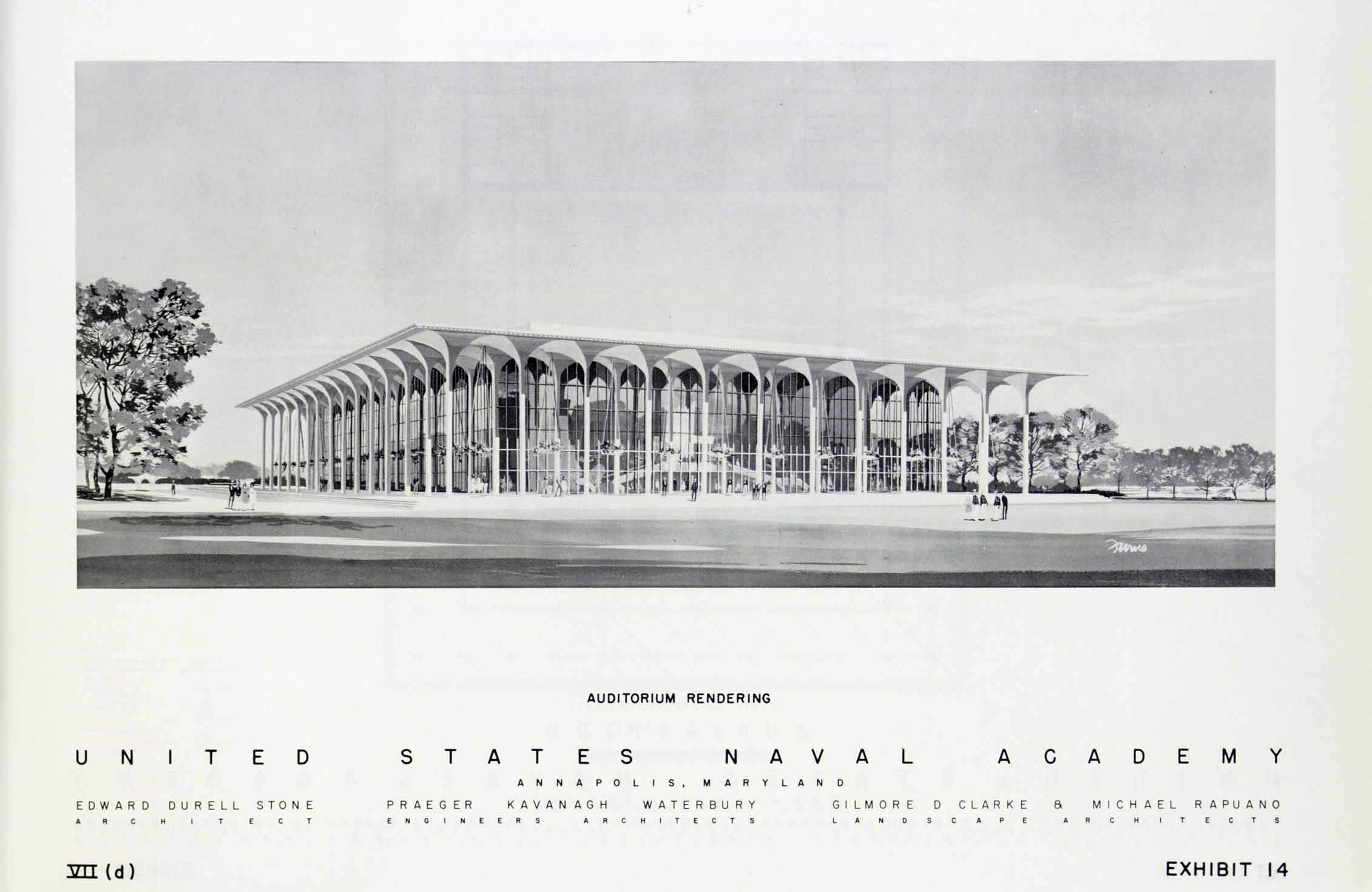 Rendering of the proposed Auditorium.

Other recommendations made by the commission included the conversion of large swathes of Sampson and Maury Halls into library space, with additional stacks space for 350,000 volumes and two new reading rooms to supplement the historic main reading room in Mahan Hall. 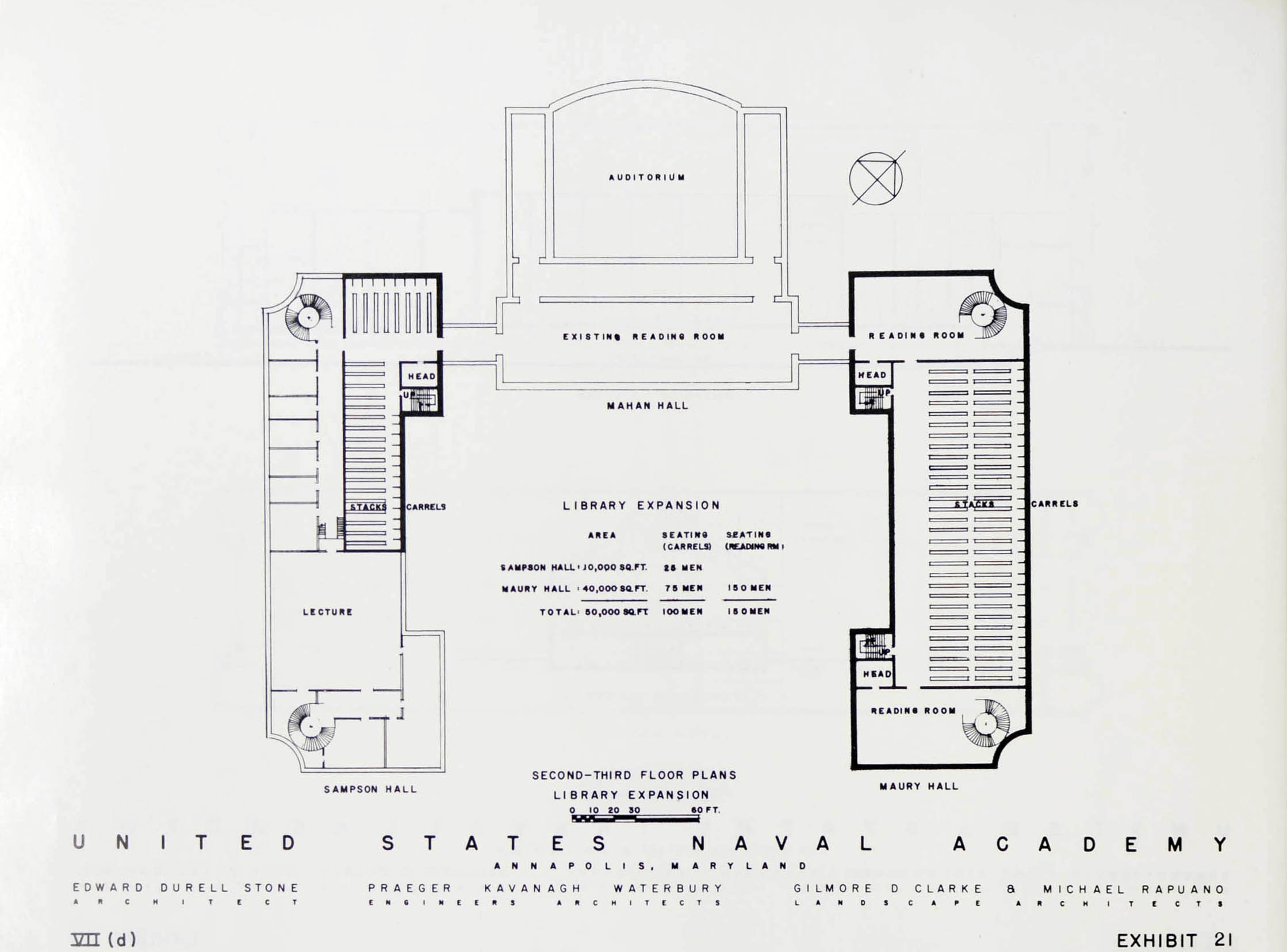 While the 1961 report and master plan was notable in that it called for the retention of more of Flagg's buildings (namely Isherwood Hall) than later plans that were ultimately adopted later in the decade, the commission's plan was not without its own calls for the destruction of historic structures. Specifically, the plan called for the acquisition of the three city blocks bounded by Hanover and King George streets for the placement of the proposed new science building, entry plaza, and a future engineering building. If adopted, the plan would have destroyed or forced the relocation of several notable eighteenth century buildings, including the Peggy Stewart House and the Lockerman-Tilton House. 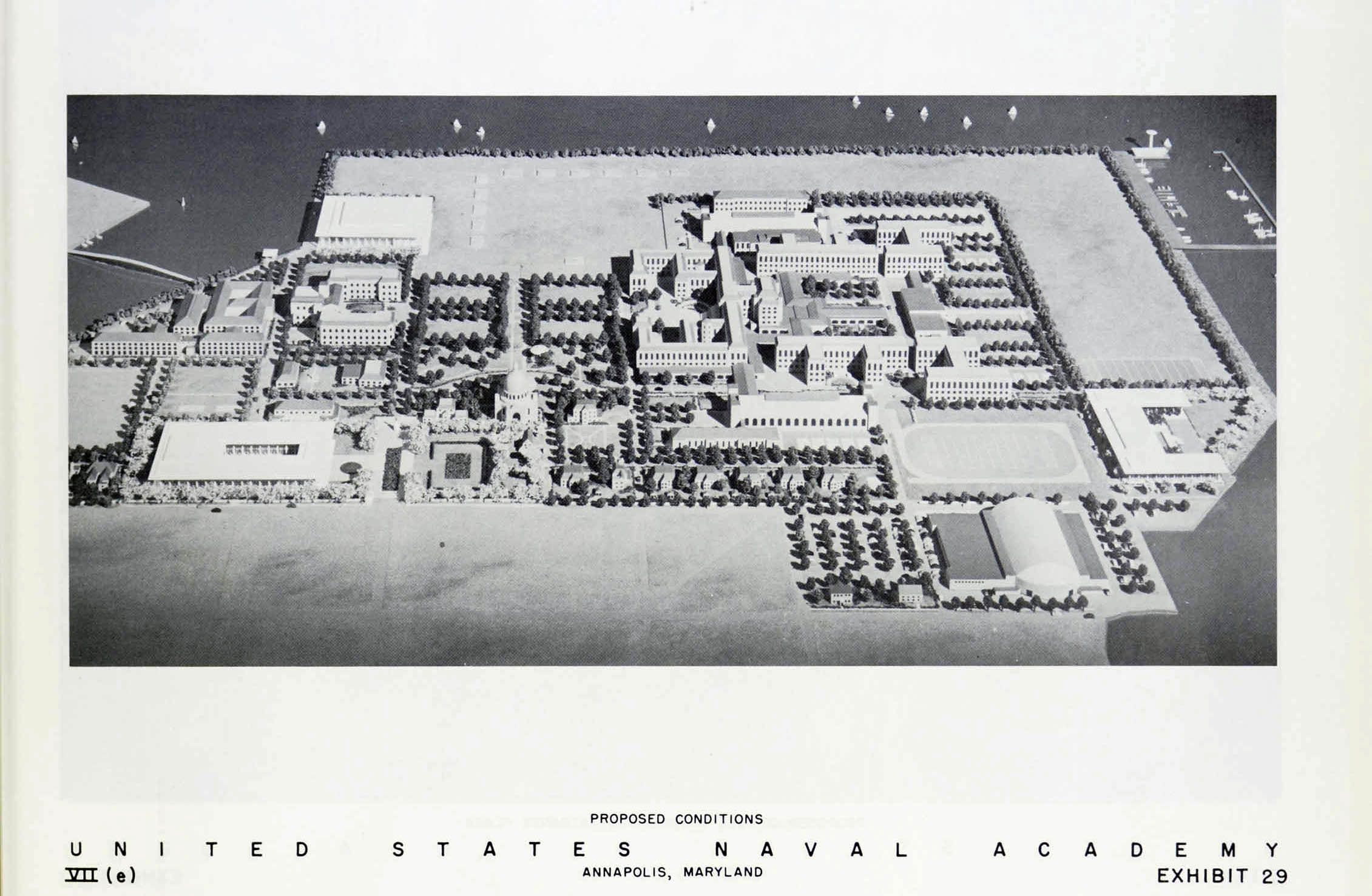 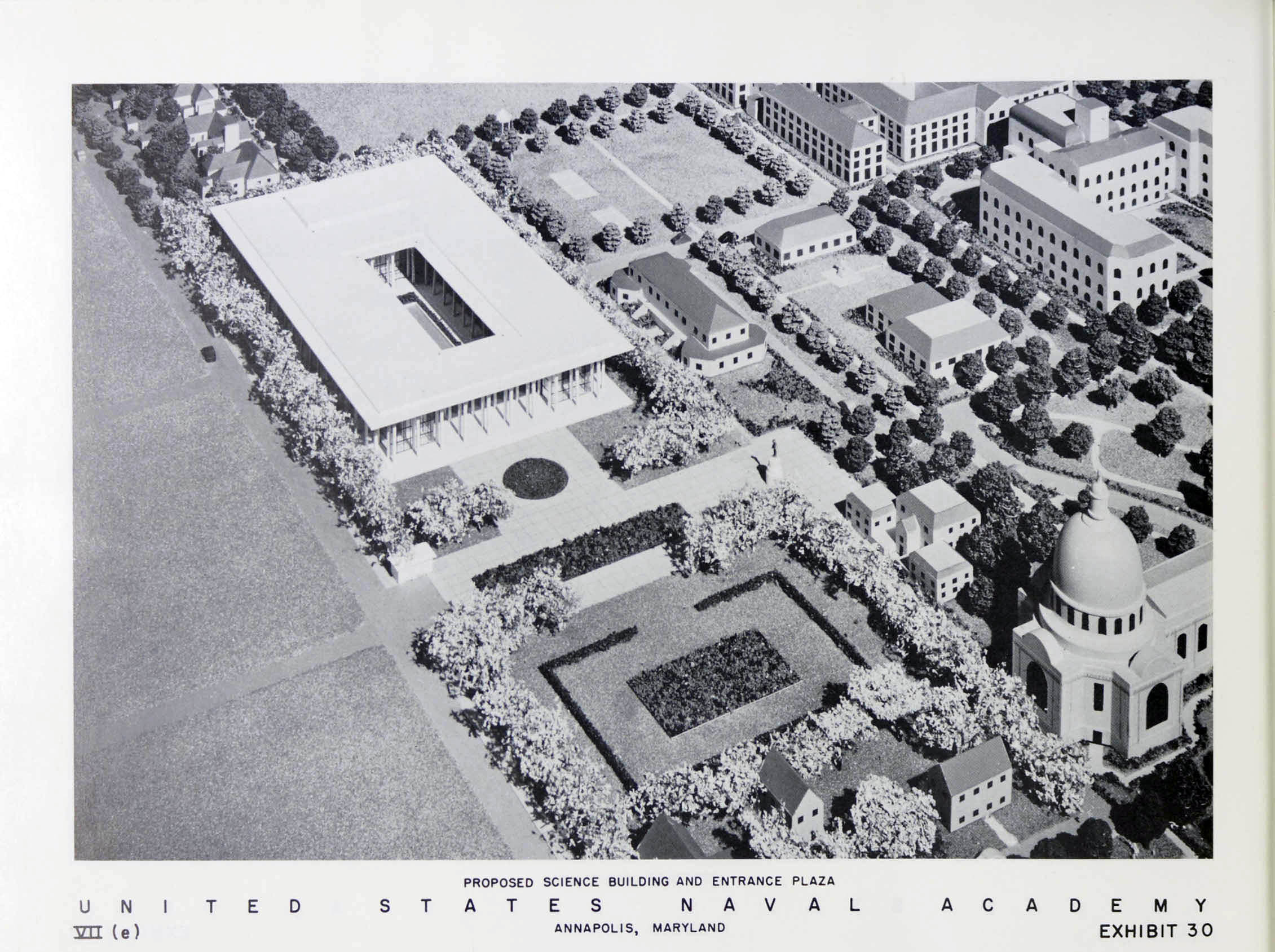 While helping to lay the groundwork for the academy's expansion of the late 1960s and early 1970s, the specific recommendations of the commission were largely rejected. Four years after the submission of the commission's report, a new master plan was submitted by the firm of John Carl Warnecke and Associates. This master plan, along with its 1967 revision, ultimately led to the construction of Michelson, Chauvenet, Nimitz, Rickover, and eventually Alumni Hall, giving us the Naval Academy that we largely see before us today.