When Helium (Briefly) Ruled the Skies

On August 8, 1924, the airship USS Shenandoah (ZR-1) successfully executed its first mooring at sea to a mast affixed to the oiler USS Patoka (AO-9). The U.S. Navy's first rigid airship, Shenandoah was christened on October 10, 1923, at Lakehurst Naval Air Station. As the Navy's first operational rigid, she served as a test bed for the Navy's lighter-than-air operational procedures and doctrines. August 8's mooring to the Patoka was one such test of Shenandoah's capabilities, as she took part in tactical exercises with the Scouting Fleet, exploring the rigid airship's utility as an advance scout searching for enemy fleets and vessels. 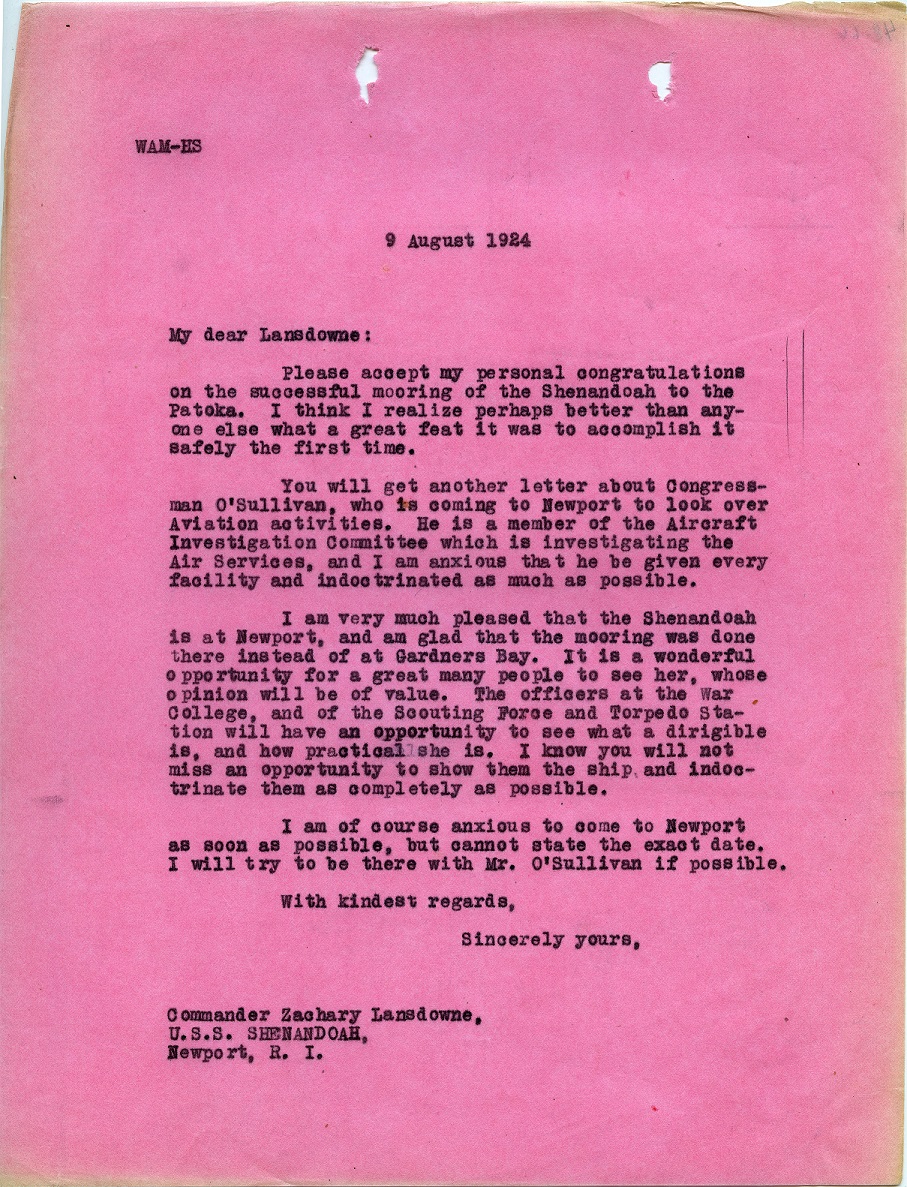 Above: Rear Admiral William A. Moffett, Chief of the Bureau of Aeronautics, writes to Commander Zachary Lansdowne, Commanding Officer of USS Shenandoah to congratulate him on the successful mooring (courtesy of the William Adger Moffett Papers, MS 198). 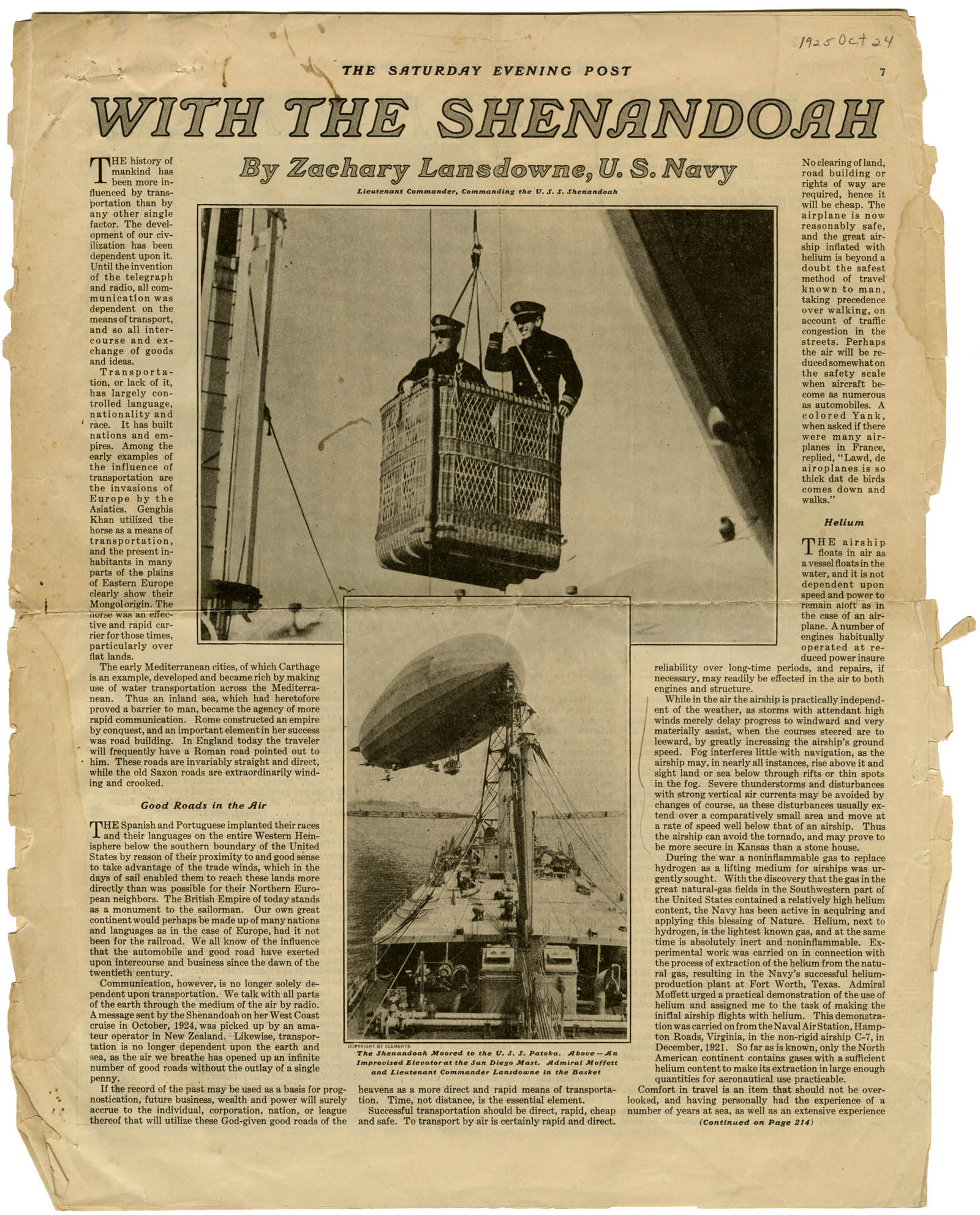 Shenandoah's success would not last, however. On September 3, 1925, she was caught in a squall line over Ohio, which tore the mighty airship apart. During the storm, the airship's suspended control car sheared off from the hull, sending the control crew plummeting to their deaths. Ultimately, the crash claimed the lives of fourteen officers and crew, including the commanding officer (and recipient of Admiral Moffett's praise above), Commander Zachary Lansdowne. 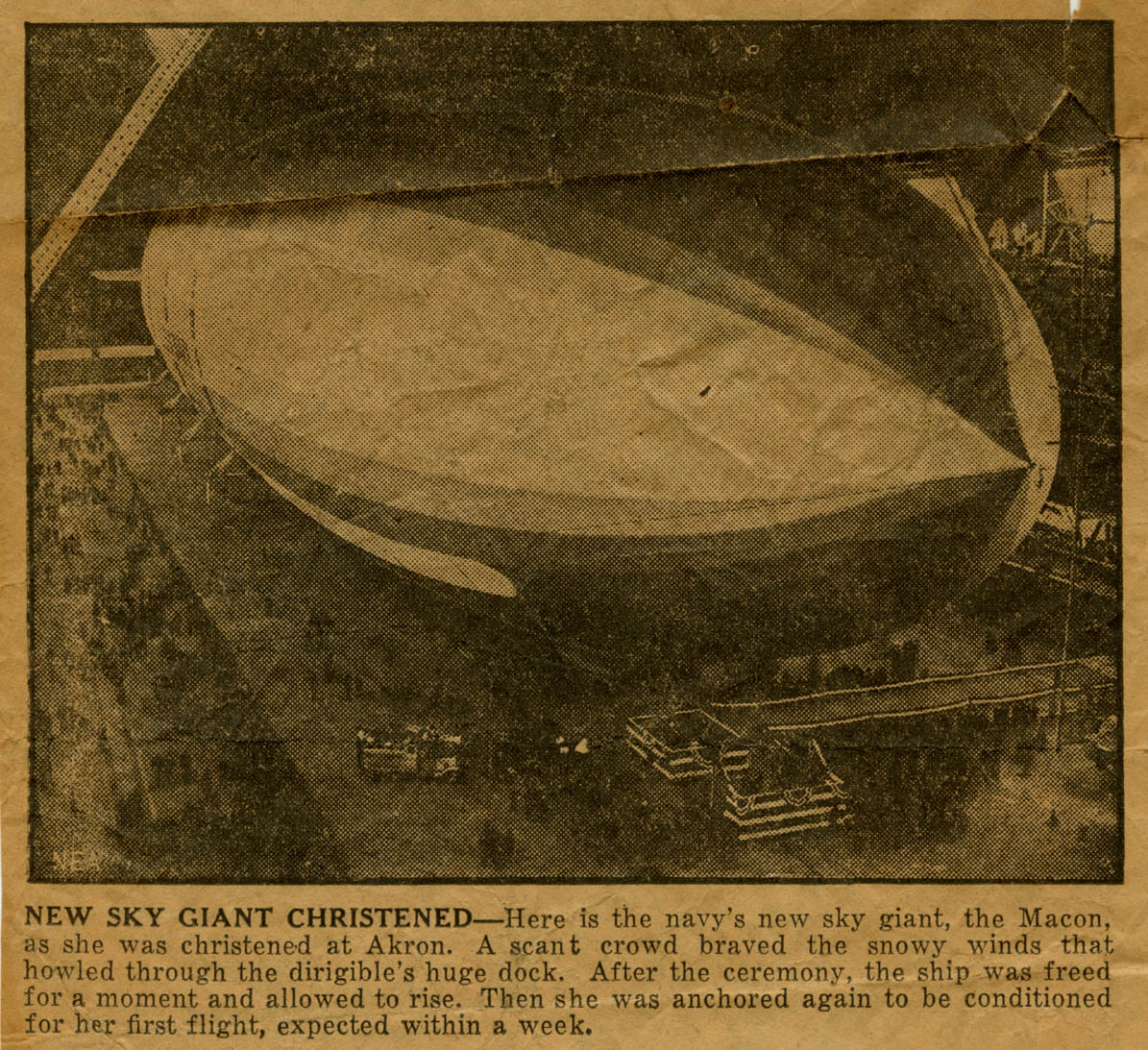 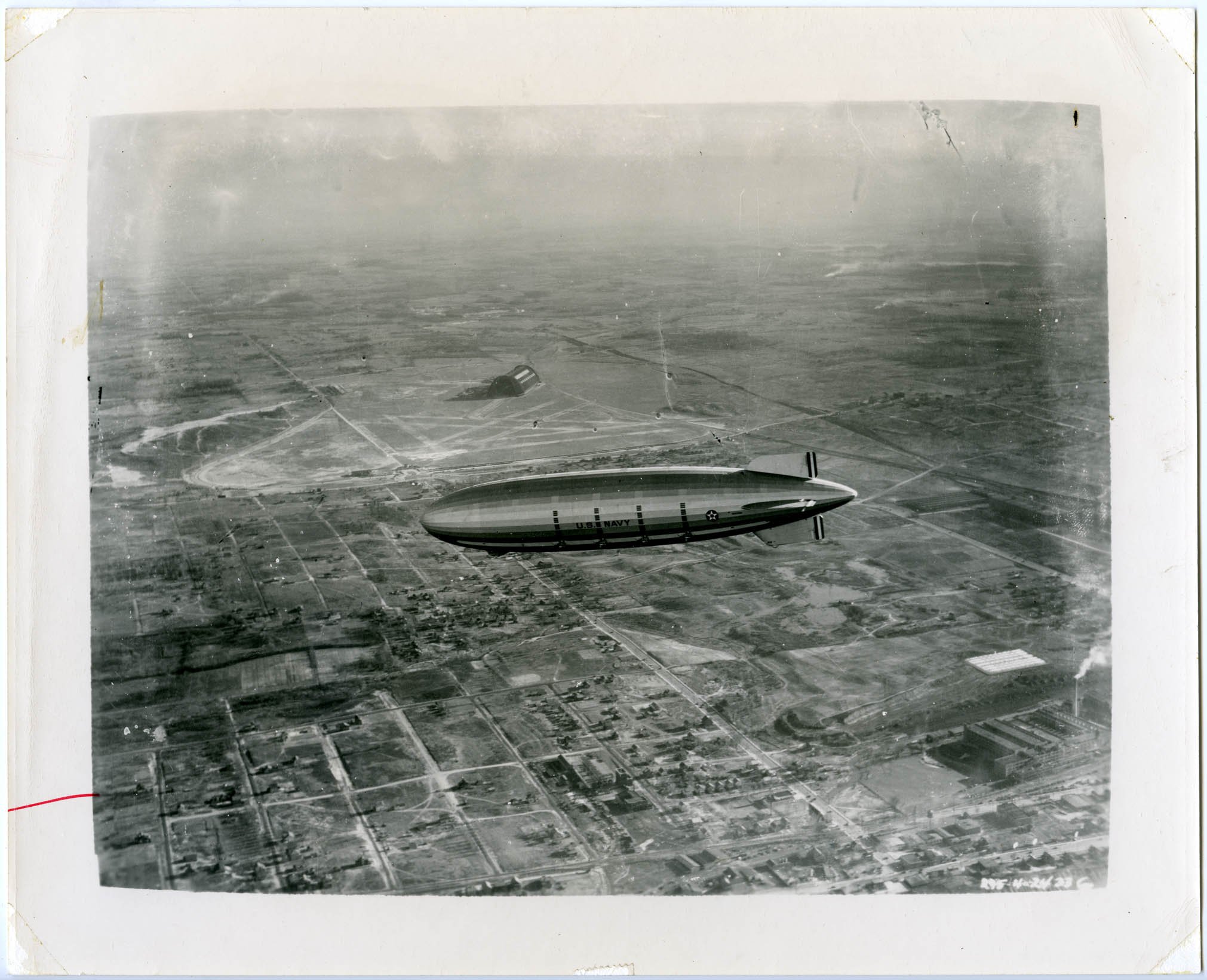 Above, left to right: Macon's christening noted in the Illinois State Journal, March 14, 1933 (courtesy of the William Adger Moffett Collection, MS 234) and Macon flying above the Goodyear Airdock in Akron, Ohio (courtesy of the Transitional Picture File).

Like her sister ship, Akron (ZRS-4), Macon represented the pinnacle of the U.S. Navy airship program, designed to lift 410,000 gross pounds with a cruising speed of 72 knots. Both ships were also designed to carry up to five scout planes in an internal hangar, which could be launched and recovered via an extendable trapeze. 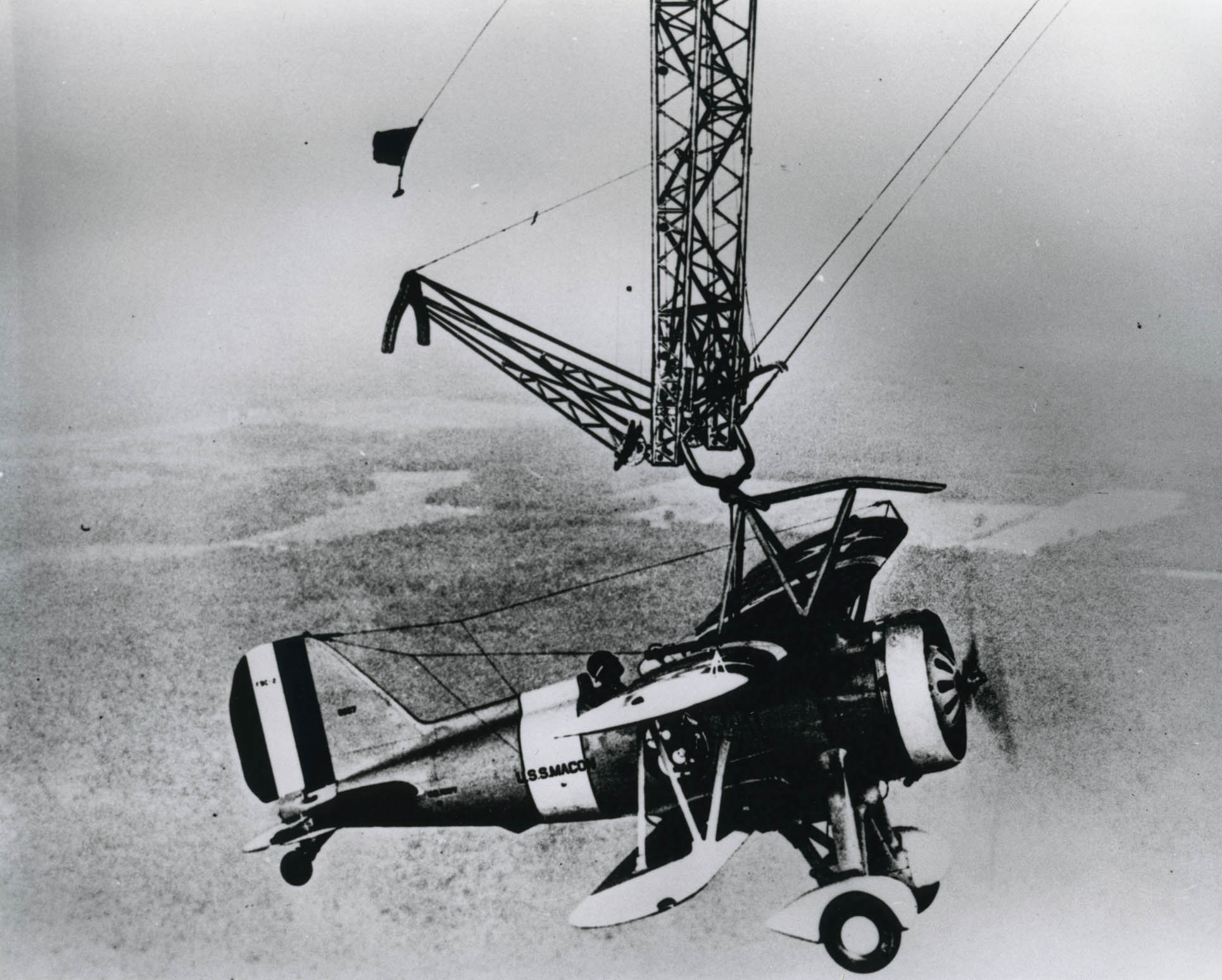 Above: USS Macon recovers one of her Curtiss Sparrowhawks in 1933 (courtesy of the Transitional Picture File).

Ultimately, both Macon and Akron would suffer fates similar to that of their predecessor, Shenandoah. Akron crashed in a storm off the coast of New Jersey on April 4, 1933, claiming the life of Admiral Moffett, while Macon was lost in a storm off the California coast on February 12, 1935. The loss of the Macon, marking the loss of three of the Navy's four airships, effectively ended the Navy's airship program.