The Voyage of the Jeannette

Despite centuries of exploration in high northern latitudes, the Arctic Ocean remained a puzzle in the late 1800s.  What lay above latitude 71° north?  An open polar sea?  A land mass to correspond with Antarctica?  Ice? 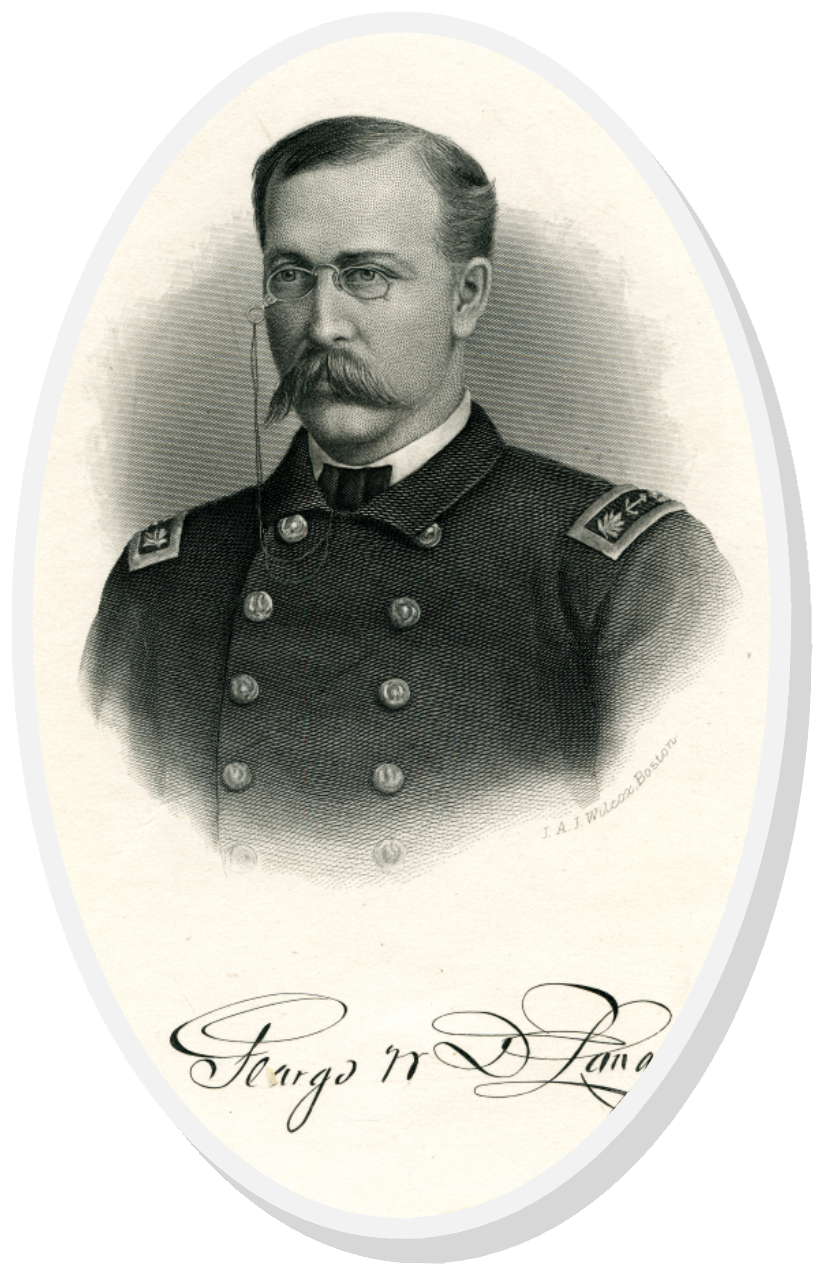 Bennett, who had sent Henry Morton Stanley to Africa in search of David Livingstone, initially rejected De Long’s proposal.  He changed his mind, however, after meeting German geographer Augustus Pete​rmann, who theorized that an open polar sea could be accessed through Bering Strait. 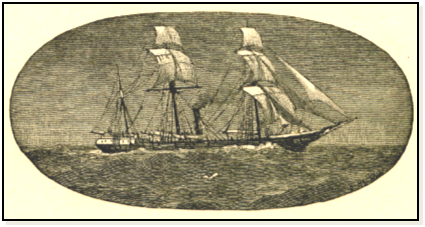 In 1878, Bennett purchased the Pandora, a bark-rigged steam yacht in which the previous owner, Sir Allen Young, had attempted the Northwest Passage.

De Long supervised work in England to repair and strengthen the ship in preparation for the expedition.  Renamed the Jeannette, the yacht became a U.S. Navy-operated vessel through a special act of Congress.  On July 8, 1879, the Jeannette sailed from San Francisco for Bering Strait.  De Long was promoted to Lieutenant Commander in November of that year. 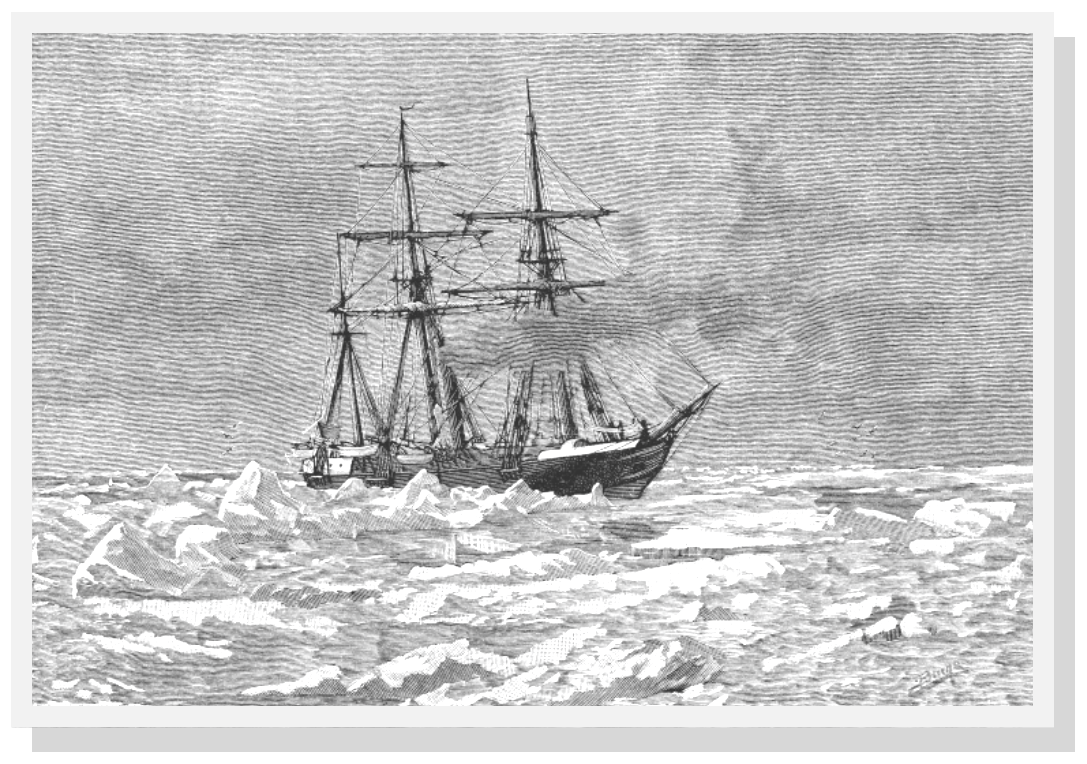 The Jeannette entered the Arctic Ocean and neared Herald Island on September 4, 1879; two days later, pack ice trapped the ship.  Locked in the pack, the Jeannette drifted erratically for almost two years.  During this time, De Long discovered Jeannette and Henrietta islands, the latter named for James Gordon Bennett’s mother.  The expedition also proved that Wrangel Land was an island. 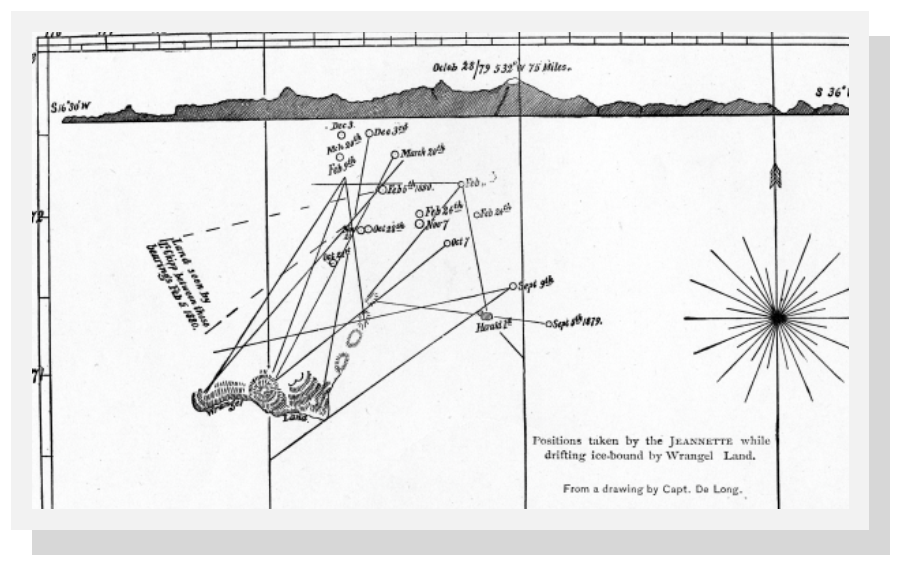 (At left, the track of the Jeannette through the ice around Wrangel Island.) 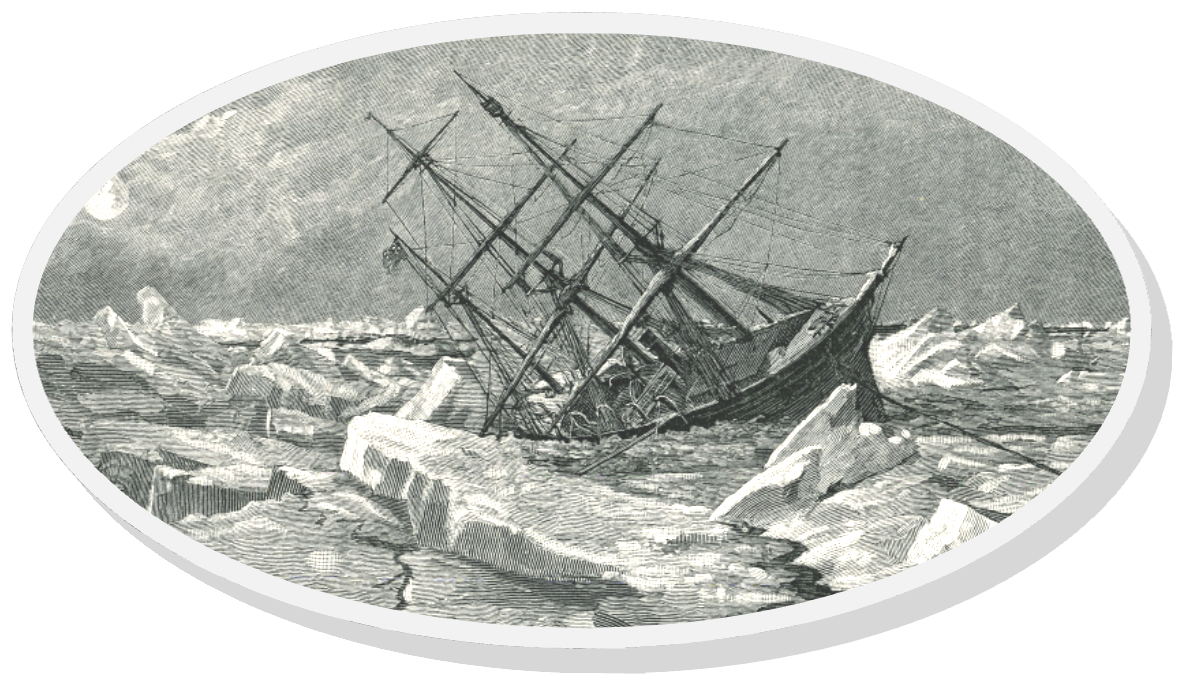 In June 1881, the pack began to crush the Jeannette.  De Long and the crew unloaded supplies, sledges, dogs, and boats (two cutters and a whaleboat) onto the ice before the vessel sank at 4 a.m. on June 13.  With the loss of its ship, the expedition headed for Siberia, over 600 nautical miles to the south.

On July 29, De Long discovered Bennett Island.  There the expedition rested for nine days before setting out in the boats for the Lena Delta.  A gale on September 12 separated the boats and the second cutter, carrying seven men under command of Lieutenant Charles W. Chipp, USNA 1868, was never seen again. 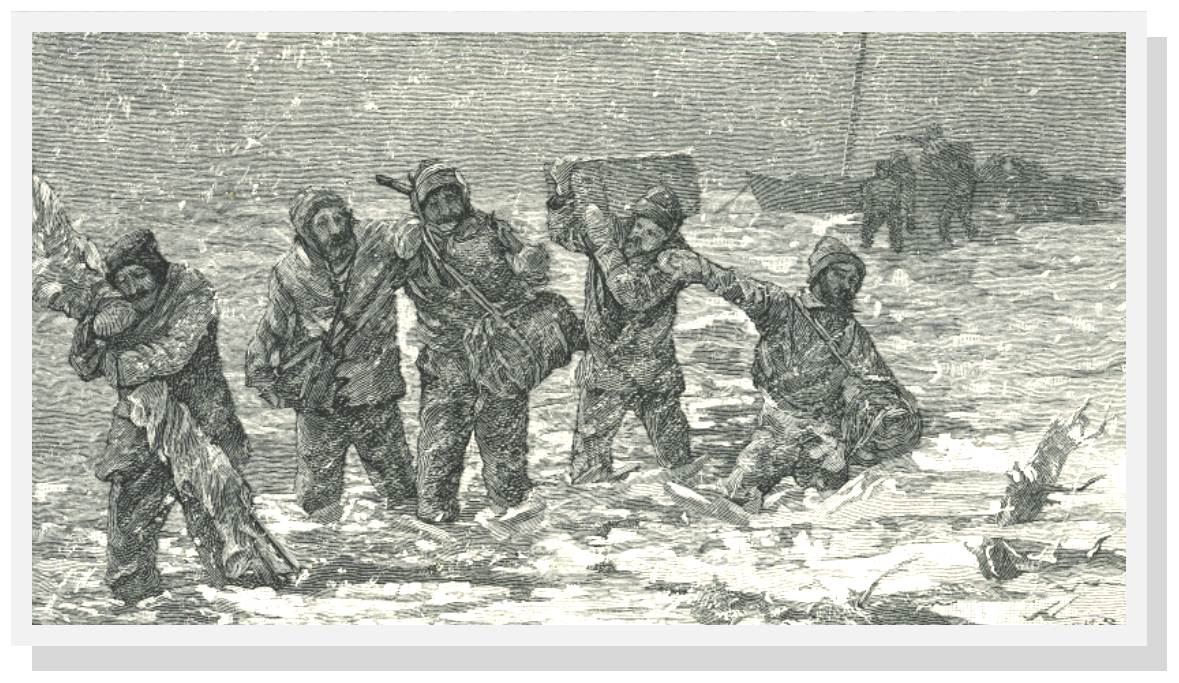 De Long, in command of the first cutter with thirteen men, arrived in the Lena Delta also, but far distant from Melville.  De Long’s party was forced to wade ashore and trek across land to seek help.  All but two, who De Long had sent ahead, perished from starvation. 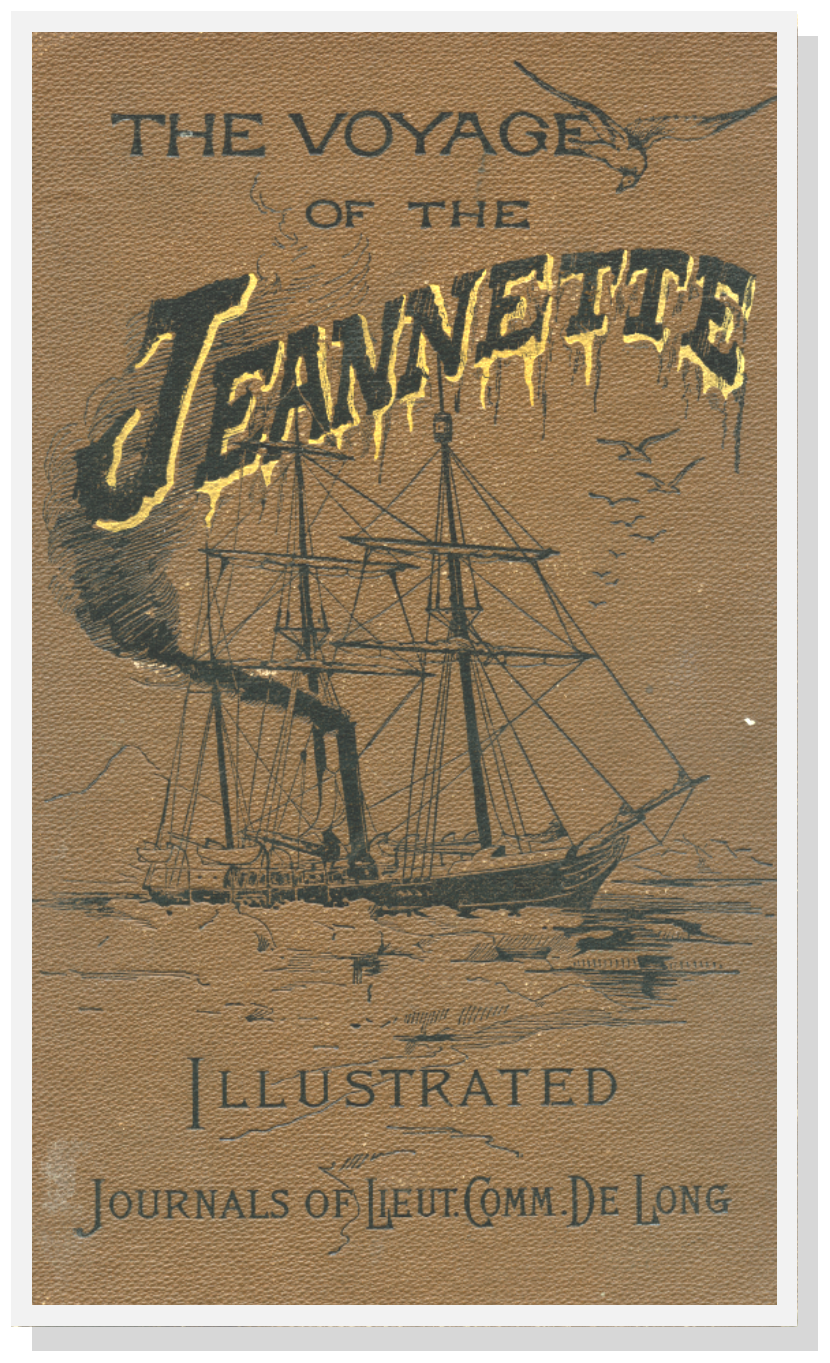 George Melville learned from the two survivors of De Long's party that the expedition's commander and his men were in dire straits, if not dead.  He set out in November to search for them but had to abandon his efforts during the Arctic winter.  In January 1882, while most of the survivors began their journey home, Melville and two companions prepared to search again, knowing this time that they would find no one alive.

They found all but one of the bodies of the men who had perished and placed them in an improvised coffin covered with rocks, upon which they placed a large wooden cross.  (In October 1890, a monument representing this cairn was unveiled in the United States Naval Academy cemetery.)  They made a futile search for Chipp and his party and then left the Arctic, returning to the United States in September.

In August 1882, Congress had appropriated money to defray the cost of returning the bodies to the United States.  The remains of De Long and nine of his companions were transported across Russia and thence to Berlin and Hamburg, receiving civil and military honors along the route.  The Hamburg American Packet Company steamer Frisia brought them to New York and on February 22, 1884 a funeral service was held at the Church of the Holy Trinity on Madison Avenue.  Seven of the bodies, including that of De Long, were buried in Woodlawn Cemetery.  The other three received private burial.

De Long's widow, Emma, edited her husband's journals and published them in 1883, with supplemental material from accounts of survivors and the naval court of inquiry held in 1882.  Special Collections & Archives owns three sets of this two-volume publication, one of these in the original pictorial cloth covers.  All the illustrations in this post are from that work.

U.S. Department of the Navy. Annual Report of the Secretary of the Navy. Washington: Government Printing Office, 1880.  (and reports for 1881-1884)

Tiberius Gracchus, Tribune of the Plebs
History of Hospitals at the U.S. Naval Academy
Faster than a Speeding Bullet: Albert Michelson and the Velocity of Light
A Very Unique Commissioning Week
The Running of the Forts