A Knight's Tale of the First Voyage around the World, 500 Years Ago

On September 8, 1522, a decaying and weather-beaten carrack limped to its mooring in Seville, three years since leaving that Spanish port on the Guadalquivir River.  The Victoria was the only remaining vessel of the five-ship fleet that had sailed from the city on August 10, 1519, under the command of Ferdinand Magellan.  Eighteen men disembarked, the sole survivors of the 250 adventurers who had set off in search of a westward route to the Moluccas, or Spice Islands.  These now emaciated and sickly voyagers were the first to circumnavigate the globe. 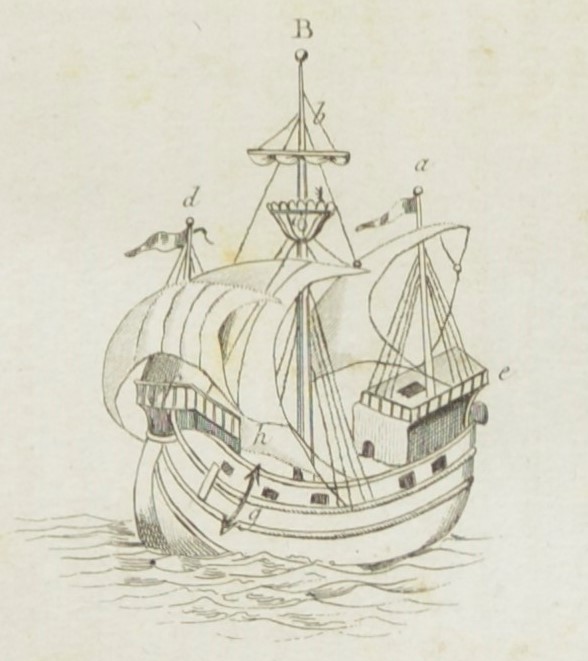 Among those descending the gangplank was Antonio Pigafetta, a native of Vicenza and Knight of the Order of St. John of Jerusalem.  Pigafetta had kept a journal during the entirety of the three-year circumnavigation.  As a Knight of Rhodes, the alternate name for the Roman Catholic military order of St. John, the Italian had served in the complement of soldier-supernumeraries aboard the Trinidad, Magellan's flagship.  In December 1521, when the Trinidad and the Victoria parted company in the Moluccas, Pigafetta transferred to the Victoria.  If he had not done so, much of what we know of Magellan's voyage would be lost. 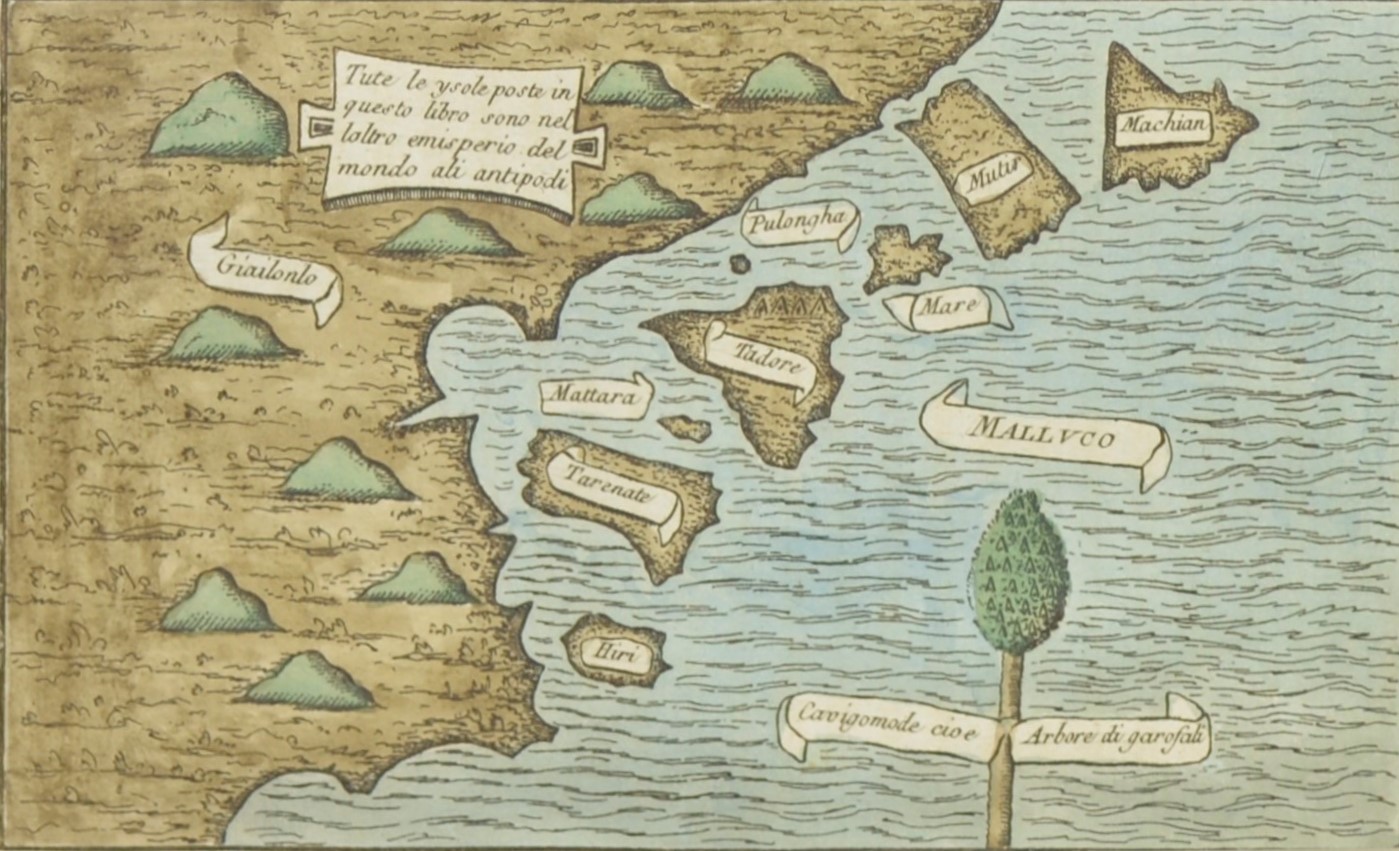 Amoretti's illustration after Pigafetta's drawing of the Moluccas, including a depiction of the clove tree.

Pigafetta's relation of Ferdinand Magellan's expedition, based on the journal he kept during the voyage, is the fullest surviving account of the hazardous circumnavigation.  From Seville's harbor, the Trinidad, San Antonio, Concepción, Victoria, and Santiago moved down the Guadalquivir to San Lúcar de Barrameda, the port of departure for Spanish voyages to America.  On September 20, 1519, the ships headed out to sea.  Stopping first at Tenerife in the Canary Islands, the vessels sailed across the Atlantic and south along the coast of South America until they found the eastern entrance to the strait that Magellan was certain existed and today bears his name.  After incredible hardships, the little fleet, now reduced to three ships, reached the Mariana Islands on March 6, 1521 and then sailed on to the Philippines where Magellan was killed in a battle with the inhabitants of Mactan.  The survivors of the attack burned one of their three remaining ships and continued the voyage to the Moluccas, where the Trinidad was found to be unseaworthy.  The Victoria, under the command of Juan Sebastián Elcano, returned alone to Spain, arriving at San Lúcar on September 6, almost three years to the day since setting out. 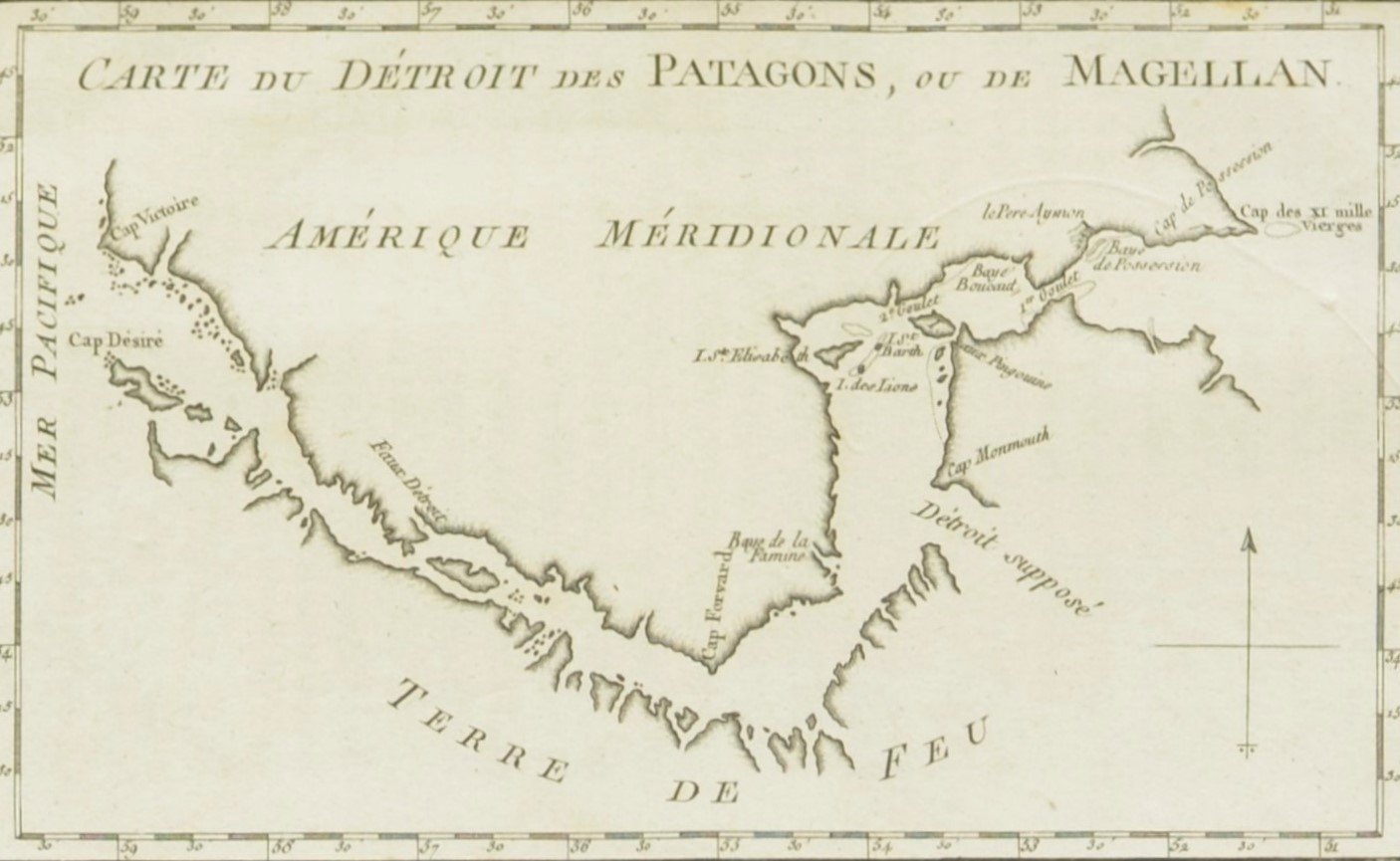 Map of the Strait of Magellan in Amoretti's French edition of Pigafetta, taken from the map of the strait by French explorer Louis-Antoine, Comte de Bougainville (1729-1811).

There are four extant manuscripts of the account that Pigafetta composed between March 1523 and April 1524, one in Italian and three in French.  Pigafetta described in detail what he saw, places and people, and recorded the way of life of the indigenous communities that the voyagers encountered.  Exhibiting a linguistic aptitude, he constructed vocabularies of various languages.  His Malay word list is one of the oldest written specimens of that language, the earliest surviving Malay manuscripts dating from around 1500 to 1550.  The Italian knight also drew twenty-three maps, the only firsthand graphic material to survive from the circumnavigation. 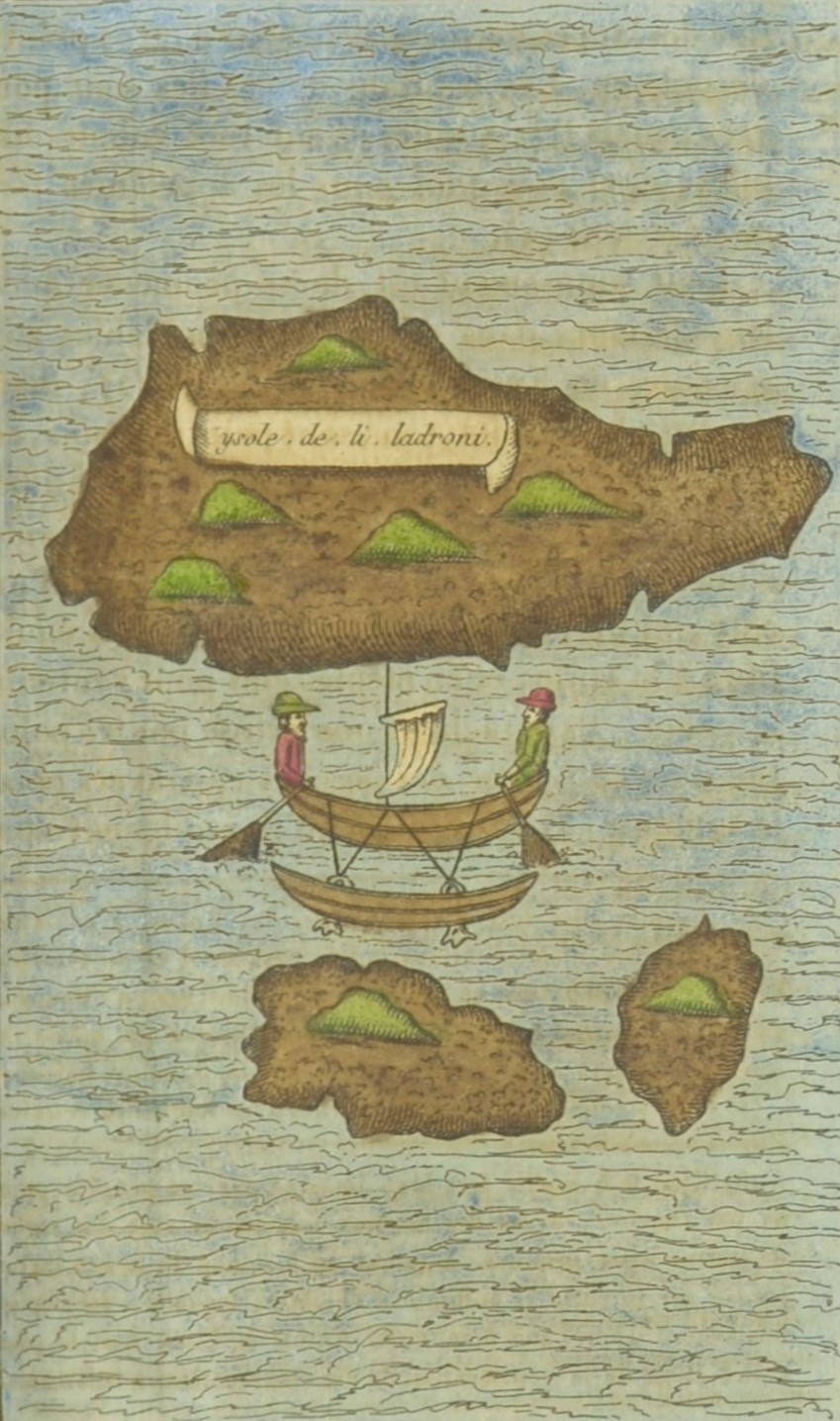 Amoretti's illustration of Pigafetta's drawing of the Mariana islands, showing an outrigger.

The earliest known printing of the relation, a summary in French of the Italian manuscript, appeared in Paris circa 1525 from the press of Simon de Colines.  In 1800, Carlo Amoretti, prefect of the Biblioteca Ambrosiana in Milan, came across the Italian manuscript, part of that library's collections, and published an edition in which he freely transcribed and modernized the sixteenth-century Italian.  He then translated his Italian work into French, which Parisian publisher H.J. Jansen issued in 1801.  While Amoretti's version of Pigafetta's account was less than ideal, it was the first time more than a summary had been published.  The Naval Academy purchased the 1801 French edition for the library sometime before 1860.  A subsequent post will discuss other versions of Antonio Pigafetta's account of the first circumnavigation of the globe that are available in Special Collections & Archives. 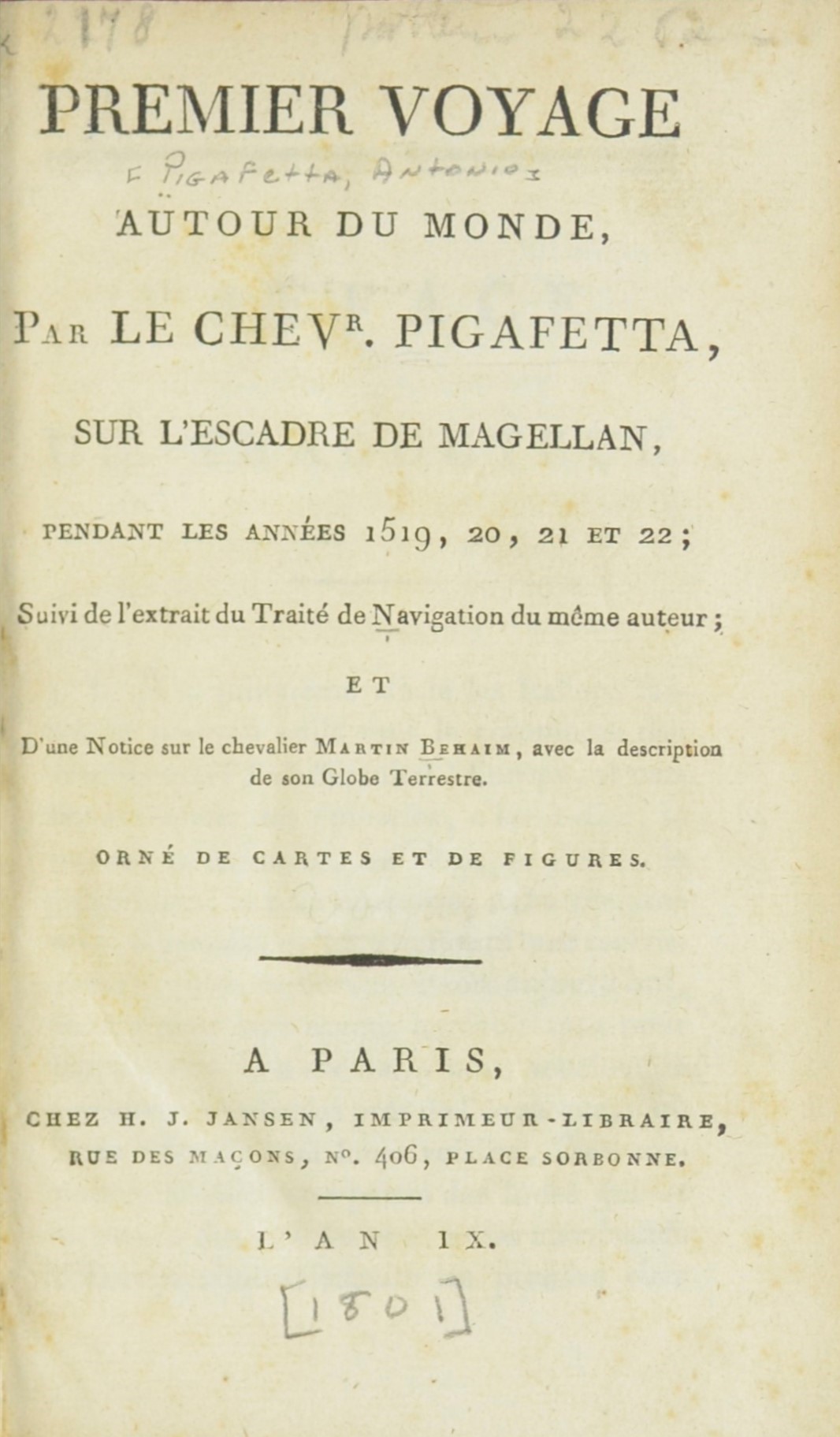 Title page of Carlo Amoretti's French translation of the Italian manuscript of Antonio Pigafetta's account of the first circumnavigation, a pre-1860 acquisition of the Naval Academy Library.

Once Upon a Midnight Dreary
The Queen Mother Visits the Naval Academy
A Knight's Tale of the First Voyage around the World, 500 Years Ago
Music and Musical Groups at the Naval Academy
Mahan Hall Clock Tower Bell Turns 100