What's going on in Nimitz Library 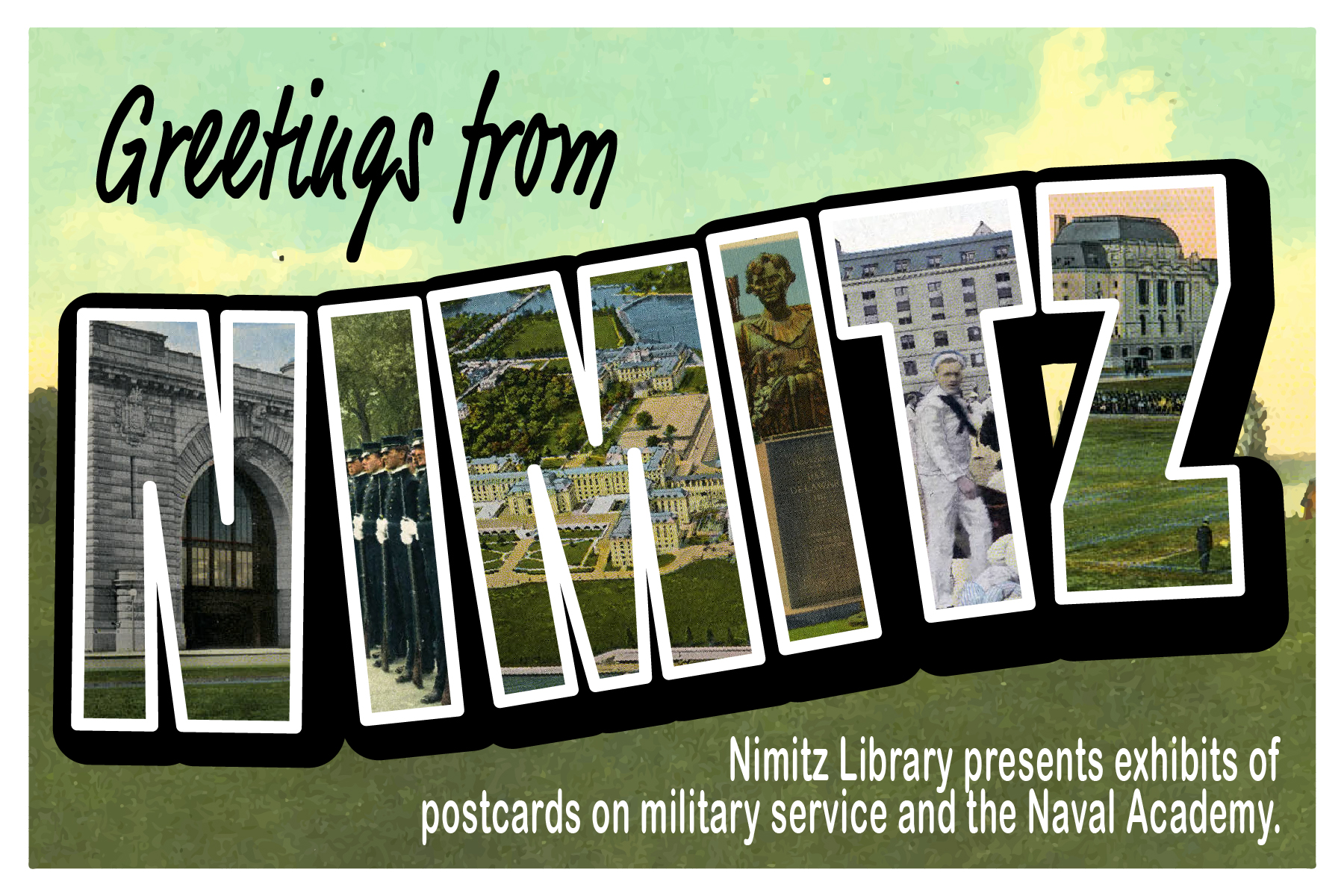 To kick off the 2021-2022 academic year, Nimitz Library is hosting an exhibit sure to excite deltiologists, aka postcard collectors. At the heart of this exhibit is Military Service: A History in Postcards, a banner display that’s been touring the country showing selections from Troy University’s Wade Hall Collection of 26,000 historic postcards from 1903 to the 1990s. The display highlights postcards from the collection focused on various aspects of military service. To augment this display, we’ve added reproductions of postcards from our own Special Collections & Archives depicting buildings, grounds, and life at the Naval Academy. There’s also a digital component to the exhibit, also from Special Collections & Archives, that presents the postcards commemorating the procession of John Paul Jones’s remains through Paris as they began their journey from his initial grave in that city to his final resting place in Annapolis. Finally, the exhibit of historical postcards incorporates a present-day element with a collection of postcards written by the class of 2025 during the recently completed Plebe Summer sharing their thoughts on military service, enrolling at Naval Academy, and their first weeks here. To fully appreciate the exhibit as a whole, it’s important to look at the history of postcards and the background of the different components of the exhibit.

A Short History of Postcards

Despite the first legislation permitting the sending of printed cards through the mail and the copyright of the first American postcard occurring in 1861, it still took the rest of the century for postcards to really catch on. It wasn’t until 1893 that the first picture postcard appeared, and even then, the images were constrained by the need to have writing space on the front since only the recipient and address could appear on the back. Also the postage rate throughout the nineteenth century for non-government produced cards was the same as the letter rate. Congress rectified these issues, first in 1898 when it reduced the postage rate, next in 1907 when messages were allowed to move to the back of the card. The latter change prompted the golden age of picture postcards.

In an era when photographic prints were few and expensive, according to Fred Bassett in “Wish You Were Here!: The Story of the Golden Age of Picture Postcards in the United States,”  postcards “offered an incredibly inexpensive and convenient way to capture people, places, and events,” including natural disasters. Combining these images with messages on the back, they “provided a convenient way to keep in touch with friends and relatives, without the burden of extensive writing.”

Military Service: A History in Postcards

It's a small wonder, then, that military-themed postcards developed. As demonstrated in the traveling exhibit from Troy University, they captured virtually every aspect of military life. Service members could send their families images from the battles they fought, the bases or ships where they were stationed, and even cartoons depicting the more comical aspects of their lives.

Dr. Wade Henry Hall’s postcard collection, from which part of this exhibit is drawn, demonstrates the wide variety of the military-themed postcards that circulated during the twentieth century. Hall himself served in the Army, and after a lifetime of collecting postcards during his travels, he donated them to his alma mater, Troy University. We’re grateful for the opportunity to bring an example of this collection to the USNA community.

We’re also grateful for the opportunity to exhibit reproductions of some of the historical postcards from Nimitz Library’s Special Collections & Archives. In his introduction to The U.S. Naval Academy in Postcards, 1900-1930, Randall W. Bannister (USNA 1977) observes that postcards’ golden age happened to coincide with the Naval Academy’s renaissance, as the grand, beaux arts buildings designed by Ernest Flagg transformed the Yard during the twentieth century’s first decade. With the emphasis on capturing moments in time on postcards of the era, it’s construction equipment where work was ongoing sometimes appears in these images. These postcards also present an opportunity to see some of the old academy buildings in color and are among the wealth of material available in our digital collections.

While the new academy took shape, a search was underway across the Atlantic to find the remains of John Paul Jones and bring them back to the US where they'd find a permanent resting place in Annapolis. Once General Horace Porter did so in 1905 in Paris, French and American officials staged an elaborate procession through the city to give the coffin a sendoff befitting the naval hero. Here again, photographers were present to document the occasion with a series of twenty postcards presented in our digital exhibit along with a contemporary map showing the procession’s route.

Postcards from the Class of 2025

As a way of connecting the past with the present, we provided some of this year’s plebes with blank postcards as they got their first tour and orientation to the library. We asked these members of the class of 2025 to jot down some reflections they had about their decision to serve in the military, enroll in the academy, and their experiences so far during Plebe Summer. Their responses are on display.